D.B. Monro /
A Grammar of the Homeric Dialect

3. There are three main sets of personal endings

4. The further modifications which the endings undergo depend chiefly upon the final letter of the stem. In certain forms the ending is preceded by Ο or Ε: that is to say, Ο before the nasals μ, ν, and Ε before other letters; e.g. τύπτο-μεν, τύπτε-τε, τύπτο-ντι (older and Doric form of τύπτουσι). We shall call this the thematic vowel1
, and the stems which contain it thematic stems. The term will naturally include the corresponding subjunctives, in which the final letter of the stem varies in the same way between η and ω, as τύπτω-μεν, τύπτη-τε, etc., and the 1st singular in -ω. These long vowels doubtless represent a primitive contraction of the thematic vowel with some other element: but the exact process can hardly be determined.

The forms which do not contain this variable ε or ο are called athematic. Among these, again, we have to distinguish a group of tenses with stems ending in -ᾰ, viz. the perfect, the 1st aorist, and some forms peculiar to the Ionic dialect, as the pluperfect (e. g. ᾔδεα I knew), the imperfect ἦα I was, ἤϊα I went. In these stems the -ᾰ changes in the 3rd singular to -ε(ν).2

The distinction between thematic and athematic applies in strictness only to forms, but may generally be extended to tenses and moods. Thus the present and imperfect of τύπτω are thematic, the same tenses of φημί are athematic. In every verb the future is thematic, the optative is athematic, etc. But the distinction does not apply to "verbs" (in the collective sense of the term), because almost every verb is made up of forms of both kinds.

5. In the following table of the personal endings found in Homer the endings distinguished by larger type are those of the athematic tenses. The endings in smaller type are, first, those of the forms with ᾰ, and, under them again, those of the thematic forms. In the dual and plural (except the 3rd plural) the endings are the same throughout. 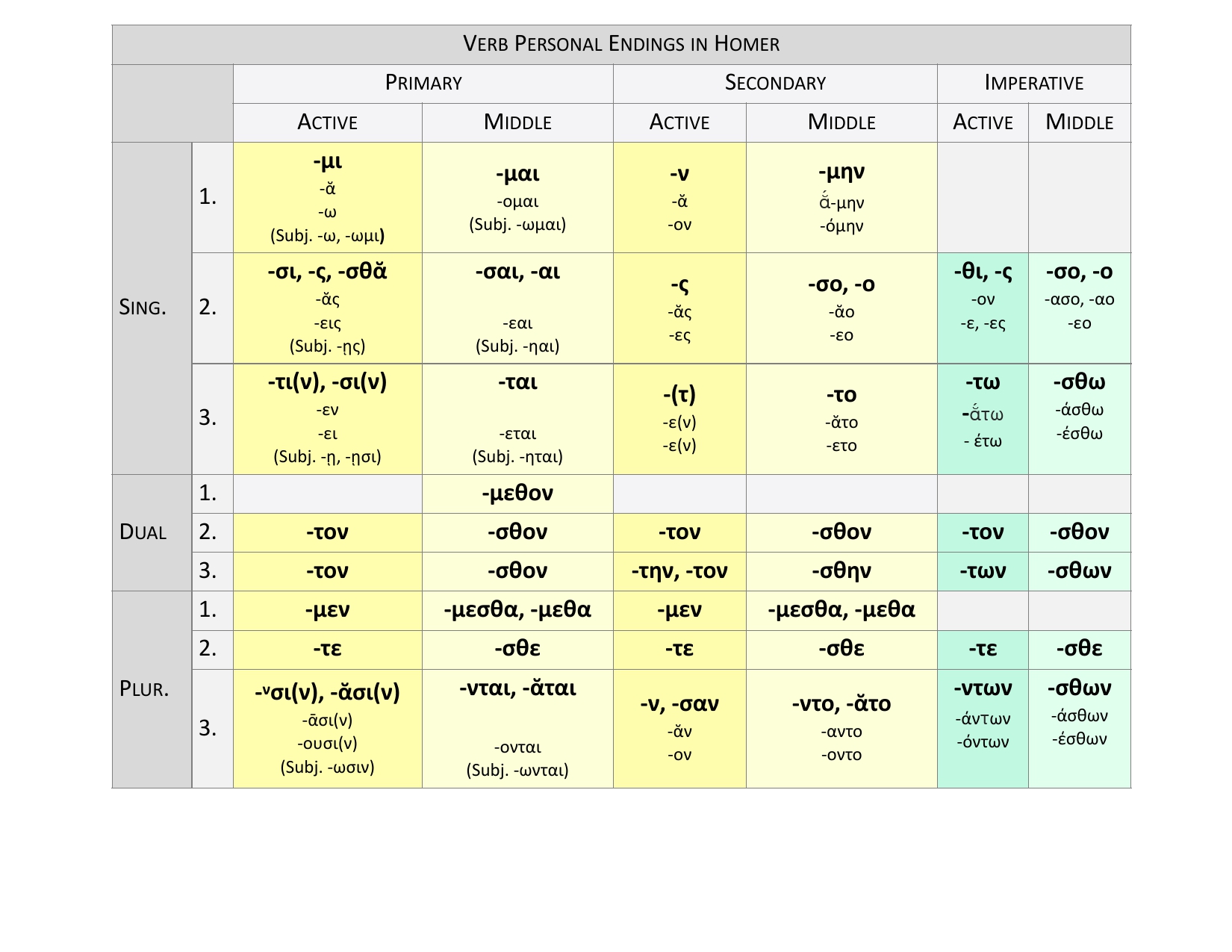 Remarks on the Table of Personal Endings

2nd Sing.: The original -σι remains only in ἐσ-σί you are.

The form εἶς (or enclitic εἰς) is read in nine places, but there is only one (Od. 17.388) in which the meter does not allow ἔσσʼ to be read instead. Probably, therefore, ἐσσί is the genuine Homeric form. The Attic εἶ is not found in Homer.

The history of this -σθα can still be traced. Originally -θα (Sanskrit
-tha) was the ending of the 2nd singular perfect indicative: hence οἶσθα for οἰδ-θα (Sanskrit vettha for ved-tha), and ἦσ-θα (Sanskrit âsitha) properly perfect from the root ἐσ-. Having in these cases appeared accidentally as an ending -σθα, it was transferred in this form to other tenses and moods.3
The forms ἦσθας, οἶσθας which appear in some MSS are due to the common 2nd singular in -ᾰς. Aristarchus rejected them in Homer.

In the middle the σ of -σαι, -σο when it follows a vowel is generally lost: so always in the secondary tenses, as ἐμάρνα-ο, δαίνυ-ο, ἔσσυ-ο, ἐείσα-ο, contracted ἐκρέμω (Il. 15.18), ἐπεφράσω (Il. 21.410), ἐκτήσω (Od. 24.193)—for which, however, the meter allows us to write ἐκρέμαʼ, etc., and the optative -οι-ο. In the present and perfect indicative and the imperative the usage is not uniform.

The loss of σ was in accordance with Greek phonetic law, and originally universal; but new forms in -σαι, -σο were produced on the analogy of forms such as λέξο (for λεχ-σο), ἧσο (for ἡσ-σο), πέπυσσαι (for πεπυθ-σαι), τέτυξο, etc., in which the σ is preserved by the preceding consonant.

In the imperative the ending -θι is common in athematic tenses.

3rd singular: The original -τι remains only in ἔσ-τι(ν), in which the phonetic change of -τι to -σι is prevented by the preceding -σ-. On the subjunctives in -ῃ-σι see § 82.

The perfect active has -ᾱσι and -ᾰσι. The latter occurs only twice in Homer, πεφύκ-ᾰσι (Od. 7.114), λελόγχᾰσιν (Od. 11.304); for other examples in Ionic see Curt. Verb. ii.166. In these forms the ᾰ belongs to the ending, since -ᾰσι is for -ᾰτι, which corresponds to the -ντι of the Doric φα-ντί, λέγο-ντι (as -ᾰται in the middle to -νται). The forms with -ᾱσι belong to two essentially distinct groups; see § 7.

Athematic -ν occurs in the forms

Ιn the middle, the forms -ᾰται, -ᾰτο are regular after consonants and the vowel ι (including the diphthongs ει, ῃ, οι, etc.); the forms -νται, -ντο after ᾰ, ε, ο. After υ, η both forms are found.

2nd and 3rd Dual. In the historical tenses, according to the ancient grammarians, the regular endings are

This scheme, however, is open to some doubt, for