264. A compound word is one whose stem is made up of two or more simple stems.

a. A final stem vowel of the first member of the compound usually disappears before a vowel, and usually takes the form of i before a consonant. Only the second member receives inflection.1

b. Only noun stems can be thus compounded. A preposition, however, often becomes attached to a verb.

265. New stems are formed by Composition in three ways:

a. Compounds of the above kinds, in which the last word is a noun, may become adjectives, meaning possessed of the quality denoted.

Note— Many compounds of the above classes appear only in the form of some further derivative, the proper compound not being found in Latin.

266. In many apparent compounds, complete words—not stems—have grown together in speech. These are not strictly compounds in the etymological sense. They are called Syntactic Compounds.

a. Compounds of faciō, factō, with an actual or formerly existing noun stem confounded with a verbal stem in ē-. These are causative in force.

b. An adverb or noun combined with a verb.

c. Many apparent compounds of stems.

d. A few phrases forced into the ordinary inflections of nouns.

In all these cases it is to be observed that words, not stems, are united.

267. Many syntactic compounds are formed by prefixing a Particle to some other part of speech.

a. Prepositions are often prefixed to Verbs. In these compounds the prepositions retain their original adverbial sense.

ā, ab AWAY:
ā-mittere  to send away

circum AROUND:
circum-mūnīre  to fortify completely

in (with verbs) IN, ON, AGAINST:
īn-ferre  to bear against

inter BETWEEN, TO PIECES:
inter-rumpere  to interrupt

ob TOWARDS, TO MEET:
of-ferre  to offer
ob-venīre  to meet

sub UNDER, UP FROM UNDER:
sub-struere  to build beneath
sub-dūcere  to lead up

super UPON, OVER AND ABOVE:
super-fluere  to overflow

Note 1— In such compounds, however, the prepositions sometimes have their ordinary force as prepositions, especially ad, in, circum, trāns, and govern the case of a noun.

Note 2— Short a of the root is weakened to i before one consonant, to e before two.

But long a is retained.

b. VERBS are also compounded with the following inseparable particles, which do not appear as prepositions in Latin.

por- FORWARD:
por-tendere  to hold forth, predict (cf. porrō  forth)

c. Many Verbals are found compounded with a preposition, like the verbs to which they correspond.

d. An Adjective is sometimes modified by an adverbial prefix.

1. Of these, per- (less commonly prae-) very; sub- somewhat; in- not, are regular, and are very freely prefixed to adjectives.

Note— Per and sub, in these senses, are also prefixed to verbs.

In īgnōscō pardon, in- appears to be the negative prefix.

2. The negative in- sometimes appears in combination with an adjective that does not occur alone.

1.The second part generally has its usual inflection; but, as this kind of composition is in fact older than inflection, the compounded stem sometimes has an inflection of its own (as, cornicen, -cinis; lūcifer, -ferī; iūdex,
-dicis), from stems not occurring in Latin. Especially do compound adjectives in Latin take the form of i-stems.

In composition, stems regularly have their uninflected form:

but, in o- and ā- stems the final vowel of the stem appears as i-.

i- is so common a termination of compounded stems, that it is often added to stems which do not properly have it. 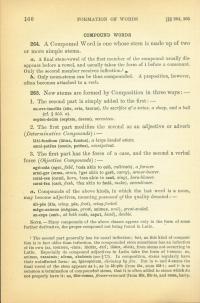 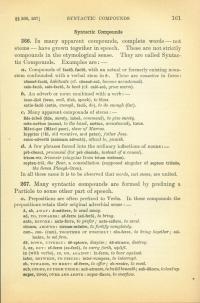 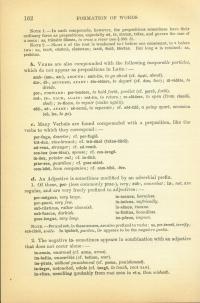