268. The study of formal grammar arose at a late period in the history of language, and dealt with language as a fully developed product. Accordingly the terms of Syntax correspond to the logical habits of thought and forms of expression that had grown up at such a period, and have a logical as well as a merely grammatical meaning. But a developed syntactical structure is not essential to the expression of thought. A form of words, like ō puerum pulchrum! (oh! beautiful boy), expresses a thought and might even be called a sentence; though it does not logically declare anything, and does not, strictly speaking, make what is usually called a sentence at all.

At a very early period of spoken language, word forms were no doubt significant in themselves, without inflections, and constituted the whole of language—just as to a child the name of some familiar object will stand for all he can say about it. At a somewhat later stage, such uninflected words put side by side made a rudimentary form of proposition: as a child might say fire bright; horse run. With this began the first form of logical distinction, that of Subject and Predicate; but as yet there was no distinction in form between noun and verb, and no fixed distinction in function. At a later stage forms were differentiated in function and—by various processes of composition which cannot be fully traced—Inflections were developed. These served to express person, tense, case , and other grammatical relations, and we have true Parts of Speech.

Not until language reached this last stage was there any fixed limit to the association of words, or any rule prescribing the manner in which they should be combined. But gradually, by usage, particular forms came to be limited to special functions (as nouns, verbs, adjectives), and fixed customs arose of combining words into what we now call Sentences. These customs are in part the result of general laws or modes of thought (logic), resulting from our habits of mind (General Grammar); and in part are what may be called By-Laws, established by custom in a given language (Particular Grammar), and making what is called the Syntax of that language.

In the fully developed methods of expression to which we are almost exclusively accustomed, the unit of expression is the Sentence: that is, the completed statement, with its distinct Subject and Predicate. Originally sentences were simple. But two simple sentence forms may be used together, without the grammatical subordination of either, to express a more complex form of thought than could be denoted by one alone. This is parataxis (arrangement side by side). Since, however, the two sentences, independent in form, were in fact used to express parts of a complex whole and were therefore mutually dependent, the sense of unity found expression in conjunctions, which denoted the grammatical subordination of the one to the other. This is hypotaxis (arrangement under, subordination). In this way, through various stages of development, which correspond to our habitual modes of thought, there were produced various forms of complex sentences. Thus, to express the complex idea I beseech you to pardon me, the two simple sentence-forms quaesō and īgnōscās were used side by side, quaesō īgnōscās; then the feeling of grammatical subordination found expression in a conjunction, quaesō ut īgnōscās, forming a complex sentence. The results of these processes constitute the subject matter of Syntax. 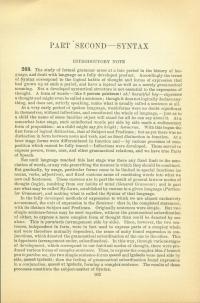