341. The genitive is regularly used to express the relation of one noun to another. Hence it is sometimes called the adjective case, to distinguish it from the dative and the ablative, which may be called adverbial cases.

The uses of the genitive may be classified as follows.

342. A noun used to limit or define another, and not meaning the same person or thing, is put in the genitive. This relation is most frequently expressed in English by the preposition of, sometimes by the English genitive (or possessive) case.

vir summae virtūtis
a man of the greatest courage

But observe the following equivalents.

343. The Possessive Genitive denotes the person or thing to which an object, quality, feeling, or action belongs.

Note 1— The possessive genitive may denote (1) the actual owner (as in Alexander's dog) or author (as in Cicero's writings), or (2) the person or thing that possesses some feeling or quality or does some act (as in Cicero's eloquence, the strength of the bridge, Catiline's evil deeds). In the latter use it is sometimes called the Subjective Genitive; but this term properly includes the possessive genitive and several other genitive constructions (nearly all, in fact, except the Objective Genitive, § 347, below).

Note 2— The noun limited is understood in a few expressions.

b. The possessive genitive often stands in the predicate, connected with its noun by a verb (Predicate Genitive).

Haec domus est patris meī.
This house is my father's.

Summa laus et tua et Brūtī est. (Fam. 12.4.2)
The highest praise is due both to you and to Brutus.
(is both yours and Brutus's)

compendī facere
to save
(make of saving)

lucrī facere
to get the benefit of
(make of profit)

c. An infinitive or a clause, when used as a noun, is often limited by a genitive in the predicate.

Sapientis est pauca loquī
It is wise (the part of a wise man) to say little.
(Not sapiēns [n.] est, etc.)

Note 1— This construction is regular with adjectives of the 3rd declension instead of the neuter nominative (see the last two examples).

Hūmānum [for hominis] est errāre.
It is man's nature to err.
(To err is human)

d. A limiting genitive is sometimes used instead of a noun in apposition (Appositional Genitive) (§ 282).

345. The genitive is used to denote quality, but only when the quality is modified by an adjective.

Māgnae est dēlīberātiōnis.
It is an affair of great deliberation.

ille autem suī iūdicī (Nep. Att. 9)
but he [a man] of independent (his own) judgment

Note— Compare Ablative of Quality (§ 415). In expressions of quality, the genitive or the ablative may often be used indifferently.

In classic prose, however, the genitive of quality is much less common than the ablative; it is practically confined to expressions of measure or number, to a phrase with êius and to nouns modified by māgnus, maximus, summus, or tantus. In general the genitive is used rather of essential, the ablative of special or incidental characteristics.

b. The Genitive of Quality, with numerals, is used to define measures of length, depth , etc. (Genitive of Measure).

fossa trium pedum
a trench of three feet [in depth]

For the Genitive of Quality used to express indefinite value, see § 417.

346. Words denoting a part are followed by the Genitive of the Whole to which the part belongs.

a. Partitive words, followed by the genitive, are:

pars mīlitum
part of the soldiers

Quis nostrum
Which of us?

Nihil erat reliquī
There was nothing left.

Suēbōrum gēns est longē maxima et bellicōsissima Germānōrum omnium. (B. G. 4.1)
The tribe of the Suevi is far the largest and most warlike of all the Germans.

tantum spatī
so much [of] space

aliquid nummōrum
a few coins (something of coins)

plāna urbis
the level parts of the town

Quid novī
What news?
(what of new?)

Note 2— The genitive of adjectives of the 3rd declension is rarely used partitively.

4. Adverbs, especially those of Quantity and of Place.

parum ōtī
not much ease (too little of ease)

ubicumque terrārum et gentium (Verr. 5.143)
wherever in the whole world

inde locī
next in order (thence of place) [poetical]

b. The poets and later writers often use the partitive genitive after adjectives, instead of a noun in its proper case.

c. Cardinal numerals (except mīlia) regularly take the ablative with ē (ex) or dē instead of the partitive genitive. So also quīdam (a certain one,) commonly, and other words occasionally.

medius ex tribus (ib.)
the middle one of the three

hominem dē comitibus meīs
a man of my companions

d. Uterque (both; properly each) and quisque (each) with nouns are regularly used as adjectives in agreement, but with pronouns take a partitive genitive.

BUT
uterque nostrum
both of us

ūnus quisque vestrum
each one of you

e. Numbers and words of quantity including the whole of any thing take a case in agreement, and not the partitive genitive. So also words denoting a part when only that part is thought of.

Quot sunt hostēs?
How many of the enemy are there?

347. The Objective Genitive is used with nouns, adjectives, and verbs.

348. Nouns of action, agency, and feeling govern the Genitive of the Object.

Note— This usage is an extension of the idea of belonging to (Possessive Genitive). Thus in the phrase odium Caesaris (hate of Cæsar) the hate in a passive sense belongs to Cæsar, as odium, though in its active sense he is the object of it, as hate (cf. a.). The distinction between the possessive (subjective) and the objective genitive is very unstable and is often lost sight of. It is illustrated by the following example: the phrase amor patris (love of a father) may mean love felt by a father, a father's love (Subjective Genitive), or love towards a father (Objective Genitive).

a. The objective genitive is sometimes replaced by a possessive pronoun or other derivative adjective.

mea invidia
my unpopularity (the dislike of which I am the object).
[Cf. odium meī (Har. Resp. 5) hatred of me]

Clōdiānum crīmen (Mil. 72)
the murder of Clodius (the Clodian charge)
[As we say, the Nathan murder]

Ea quae faciēbat, tuā sē fīdūciā facere dīcēbat. (Verr. 5.176)
What he was doing, he said he did relying on you. (with your reliance)

b. Rarely the objective genitive is used with a noun already limited by another genitive.

c. A noun with a preposition is often used instead of the objective genitive.

adoptiō in Domitium (Tac. Ann. 12.25)
the adoption of Domitius
[A late and bold extension of this construction.] 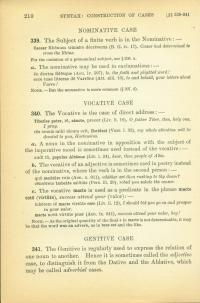 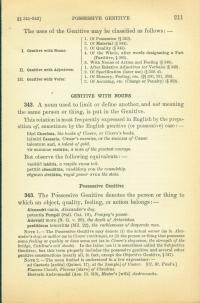 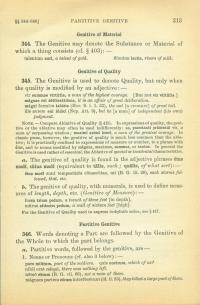 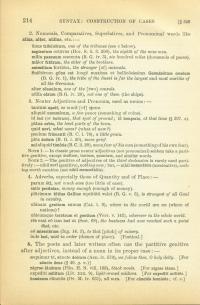 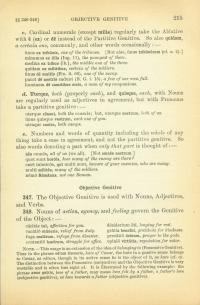 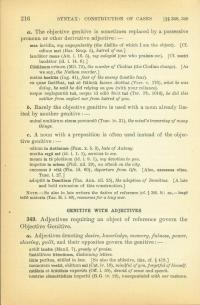