242. Derivative Adjectives, which often become nouns, are either Nominal (from nouns or adjectives) or Verbal (as from roots or verb stems).

243. Diminutive Adjectives are usually confined to one gender, that of the primitive, and are used as Diminutive Nouns.

Note 1— These diminutive endings are all formed by adding -lus to various stems. The formation is the same as that of -ulus in § 251 (below). But these words became settled as diminutives, and retained their connection with nouns. So in English the diminutives whitish, reddish, bookish and snappish. -culus -lus added to adjectives in -cus formed from stems in n- and s-:

whence the -cu- becomes a part of the termination, and the whole ending (-culus) is used elsewhere, but mostly with n- and s- stems, in accordance with its origin.

a. -ciō, added to stems in n-, has the same diminutive force, but is used with masculines only.

These words, originally Greek adjectives, have almost all become nouns in Latin.

Hesperus: Hesper-ides (from Hesper-is, -idis), pl.
the daughters of Hesperus, the Hesperides

245. Adjectives meaning full of, prone to , are formed from noun stems with the suffixes -ōsus, -lēns, lentus

246. Adjectives meaning provided with are formed from nouns by means of the regular participial endings -tus, -ātus, -ītus, ūtus

Note— -ātus, -ītus, -ūtus, imply reference to an imaginary verb stem; -tus is added directly to nouns without any such reference.

247. Adjectives of various meanings, but signifying in general made of or belonging to, are formed from nouns by means of the suffixes -eus, -ius,
-āceus, -īcius, āneus (-neus), -ticus

-ris is an inherited suffix, but in most of these formations -āris arises by differentiation for -ālis in words containing an l (as mīlit-āris).

1. So from common nouns:

2. But especially from proper nouns to denote belonging to or coming from :

a. Many derivative adjectives with these endings have by usage become nouns.

The long vowels come from a confusion with verb stems (as in plē-nus, fīnī-tus, tribū-tus), and from the noun stem in ā-.

A few nouns occur of similar formation, as if from verb stems in ō- and ū-.

250. Other adjectives meaning in a general way belonging to (especially of places and times ) are formed with the suffixes -ter (-tris), -ester
(-estris), -timus, -nus, -ernus, -urnus, ternus (-turnus)

and hence, by analogy

By an extension of the same principle were formed the suffixes -ternus and -turnus from words like paternus and nocturnus.

a. Adjectives meaning belonging to are formed from nouns by means of the suffixes ārius, -tōrius (sōrius)

251. Adjectives expressing the action of the verb as a quality or tendency are formed from real or apparent verb stems with the suffixes āx, idus, ulus, vus (uus, īvus, tīvus). -āx denotes a faulty or aggressive tendency;
-tīvus is oftener passive.

Note— Of these, -āx is a reduction of -ācus (stem vowel ā- + -cus), become independent and used with verb stems. Similar forms in -ĕx, -ōx, -īx, and -ūx are found or employed in derivatives.

-idus is no doubt denominative.

But later it was used to form adjectives directly from verb stems.

-ulus is the same suffix as in diminutives, but attached to verb stems.

-vus seems originally primary (cf. § 234.2.8), but -īvus and -tīvus have become secondary and are used with nouns.

253. Verbal Adjectives that are Participial in meaning are formed with the suffixes -ndus, -bundus, -cundus

a. -ndus (the same as the Gerundive ending) forms a few active or reflexive adjectives.

b. -bundus, -cundus, denote a continuance of the act or quality expressed by the verb.

Note— These must have been originally nominal, as seen in the following. 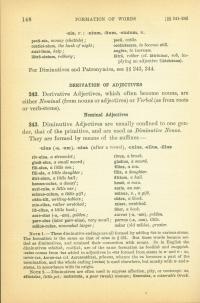 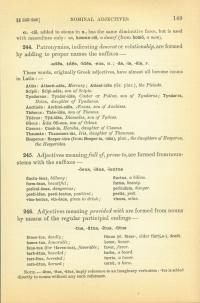 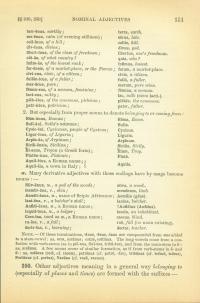 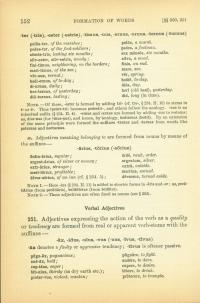 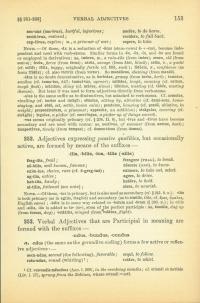 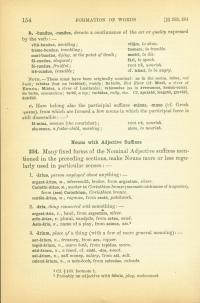