1. The Latin Alphabet is the same as the English (which is in fact borrowed from it) except that it does not contain J, U, and W.

Note 1— The Latin alphabet was borrowed in very early times from a Greek alphabet (though not from that most familiar to us) and did not at first contain the letters G and Y. It consisted of capital letters only, and the small letters with which we are familiar did not come into general use until the close of the eighth century A.D.

a. The character C originally meant G, a value always retained in the abbreviations C. (for Gāius) and Cn. (for Gnaeus).

Note— In early Latin C came also to be used for K in a few words, and K disappeared except before a in a few words, as Kal. (Kalendae), Karthāgō. Thus there was no distinction in writing between the sounds of G and K. Later this defect was remedied by forming (from C) the new character G. This took the alphabetic place formerly occupied by Z, which had gone out of use. In Cicero's time (see N. D. 2.93), Y (originally a form of V) and Z were introduced from the ordinary Greek alphabet to represent sounds in words derived from the Greek, and they were put at the end of the Latin alphabet.

b. I and V were used both as vowels and as consonants (see § 5).  In this grammar, I is used for both vowel and consonant i, U for vowel u, and V for consonant u: iūs, vir, iuvenis. 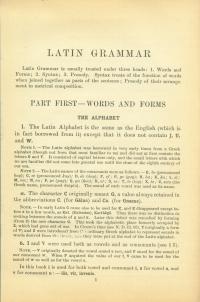