350. Verbs of remembering and forgetting take either the accusative or the genitive of the object.

a. Meminī takes the accusative when it has the literal sense of retaining in the mind what one has seen, heard, or learned. Hence the accusative is used of persons whom one remembers as acquaintances, or of things which one has experienced. So oblīvīscor in the opposite sense—to forget literally, to lose all memory of a thing (very rarely, of a person).

Utinam avum tuum meminissēs! (id. 1.34)
Oh! that you could remember your grandfather! (but he died before you were born)

Multa ab aliīs audīta meminērunt. (De Or. 2.355)
They remember many things that they have heard from others.

Hinc iam oblīvīscere Grâiōs. (Aen. 2.148)
From henceforth forget the Greeks.
(i.e. not merely disregard them, but banish them from your mind, as if you had never known them).

b. Meminī takes the genitive when it means to be mindful or regardful of a person or thing, to think of somebody or something (often with special interest or warmth of feeling). So oblīvīscor in the opposite sense—to disregard, or dismiss from the mind—and the adjective oblītus (careless or regardless).

Faciam ut hûius locī dieique meique semper memineris. (Ter. Eun. 801)
I will make you remember this place and this day and me as long as you live.

Nec mē meminisse pigēbit Elissae, dum memor ipse meī. (Aen. 4.335)
Nor shall I feel regret at the thought of Elissa, so long as I remember myself.

oblīvīscī temporum meōrum, meminisse āctiōnum (Fam. 1.9.8)
to disregard my own interests, to be mindful of the matters at issue

Nec tamen Epicūrī licet oblīvīscī. (Fin. 5.3)
And yet I must not forget Epicurus.

Oblīvīscere caedis atque incendiōrum. (Cat. 1.6
Turn your mind from slaughter and conflagrations.  (dismiss them from your thoughts).

Note 2— Meminī in the sense of mention takes the genitive.

c. Reminīscor is rare. It takes the accusative in the literal sense of call to mind, recollect the genitive in the more figurative sense of be mindful of.

Reminīscerētur et veteris incommodī populī Rōmānī et prīstinae virtūtis Helvētiōrum. (B. G. 1.13)
Let him remember both the former discomfiture of the Roman people and the ancient valor of the Helvetians.
[A warning— let him bear it in mind (and beware)!]

Recordāre cōnsēnsum illum theātrī. (Phil. 1.30)
Recall that unanimous agreement of the [audience in the] theatre.

Note— Recordor takes the genitive once (Pison. 12); it is never used with a personal object, but may be followed by dē with the ablative of the person or thing (cf. § 351, Note, below).

351. Verbs of reminding take with the Accusative of the person a genitive of the thing; except in the case of a neuter pronoun, which is put in the accusative (cf. § 390.c). So admoneō, commoneō, commonefaciō, commonefīō. But moneō with the genitive is found in late writers only.

Note— All these verbs often take dē with the ablative, and the accusative of nouns as well as of pronouns is sometimes used with them.

Verbs of Accusing, Condemning and Acquitting

352. Verbs of accusing, condemning, and acquitting, take the Genitive of the Charge or Penalty.

a. Peculiar genitives, under this construction.

capitis, as in damnāre capitis to sentence to death

mâiestātis [laesae] treason
(crime against the dignity of the state)

repetundārum [rērum] extortion
(lit. of an action for reclaiming money)

vōtī damnātus (or reus bound [to the payment] of one's vow
(i.e. successful in one's effort)

Note— The origin of these genitive constructions is pointed at by the following.

quantae pecūniae iūdicātī essent (id. xx.1.47)
how much money they were adjudged to pay (in a mere suit for debt)

These expressions show that the Genitive of the penalty comes from the use of the genitive of value to express a sum of money due either as a debt or as a fine. Since in early civilizations all offences could be compounded by the payment of fines, the genitive came to be used of other punishments, not pecuniary. From this to the genitive of the actual crime is an easy transition, inasmuch as there is always a confusion between crime and penalty (cf. Eng. guilty of death). It is quite unnecessary to assume an ellipsis of crīmine or iūdiciō.

353. Other constructions for the Charge or Penalty are--

354. Many verbs of feeling take the genitive of the object which excites the feeling.

a. Verbs of pity, as misereor and miserēscō, take the Genitive.

c. With miseret, paenitet, etc., the cause of the feeling may be expressed by an infinitive or a clause.

Note— Miseret etc. are sometimes used personally with a neuter pronoun as subject.

355. The impersonals interest and rēfert take the genitive of the person (rarely of the thing) affected. The subject of the verb is a neuter pronoun or a substantive clause.

aliquid quod illōrum magis quam suā rētulisse vidērētur (Iug. 111)
something which seemed to be more for their interest than his own

Videō enim quid meā intersit, quid utrīusque nostrum. (Fam. 7.23.4)
For I see what is for my good and for the good of us both.

a. Instead of the genitive of a personal pronoun the corresponding possessive is used in the ablative singular feminine after interest or rēfert.

Quid tuā id rēfert? Māgnī. (Ter. Ph. 723)
How does that concern you? Much.
[See also the last two examples above.]

Vehementer intererat vestrā quī patrēs estis. (Plin. Ep. 4.13.4)
It would be very much to your advantage, you who are fathers.

Note— This is the only construction with rēfert in classic prose, except in one passage in Sallust (see example above).

b. The accusative with ad is used with interest and rēfert to express the thing with reference to which one is interested.

Māgnī ad honōrem nostrum interest. (Fam. 16.1)
It is of great consequence to our honor.

Note 1— Very rarely the person is expressed by ad and the accusative, or (with rēfert) by the dative (probably a popular corruption).

Quid id ad mē aut ad meam rem rēfert? (Pl. Per. 513)
What difference does that make to me or to my interests?

Note 2— The degree of interest is expressed by a Genitive of Value, an adverb, or an adverbial accusative.

Verbs of Plenty and Want

Convīvium vīcīnōrum compleō. (Cat. M. 46; in the mouth of Cato)
I fill up the banquet with my neighbors.

Quid est quod dēfēnsiōnis indigeat? (Rosc. Am. 34)
What is there that needs defence?

Note— Verbs of plenty and want more commonly take the ablative (see § 409.a, § 401), except egeō, which takes either case, and indigeō. But the genitive is by a Greek idiom often used in poetry instead of the Ablative with all words denoting separation and want (cf. § 357.b.3). 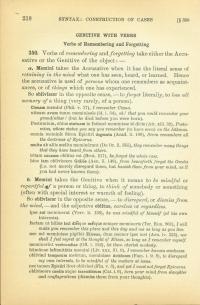 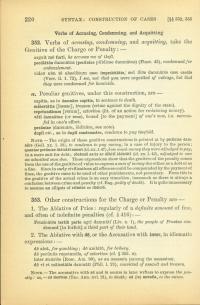 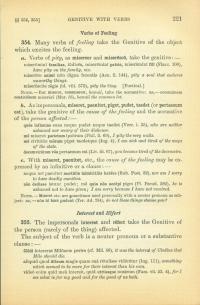 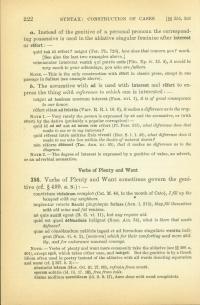