The Pluperfect and Future Perfect Tenses

(1) Locī nātūra erat haec, quem locum nostrī castrīs dēlēgerant. (B. G. 2.18)
This was the nature of the ground which our men had chosen for a camp.

Quae sī quandō adepta est id quod eī fuerat concupītum, tum fert alacritātem (Tusc. 4.15)
If it (desire) ever has gained what it had [previously] desired, then it produces joy.

For the Epistolary Pluperfect, see § 479.

478. The future perfect denotes an action as completed in the future.

Sī illīus īnsidiae clāriōrēs hāc lūce fuerint, tum dēnique obsecrābō. (Mil. 6)
When the plots of that man have been shown to be as clear as daylight, then, and not till then, shall I conjure you.

Ego certē meum officium praestiterō. (B. G. 4.25)
I at least shall have done my duty (i.e. when the time comes to reckon up the matter, I shall be found to have done it, whatever the event).

Note— Latin is far more exact than English in distinguishing between mere future action and action completed in the future. Hence the future perfect is much commoner in Latin than in English. It may even be used instead of the future, from the fondness of the Romans for representing an action as completed.

Quid inventum sit paulō post vīderō. (Acad. 2.76)
What has been found out I shall see presently.

Quī Antōnium oppresserit bellum taeterrimum cōnfēcerit. (Fam. 10.19)
Whoever crushes (shall have crushed) Antony will finish (will have finished) a most loathsome war. 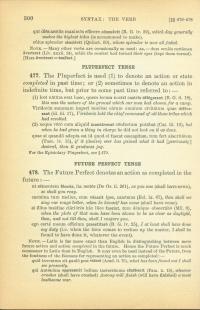