174. The parent (Indo-European) speech from which Latin comes had two main classes of verbs:

Of the Athematic Verbs few survive in Latin, and these are counted as irregular, except those which have been forced into one of the four “regular” conjugations. Even the irregular verbs have admitted many forms of the thematic type.

Of the Thematic Verbs a large number remain. These may be divided into two classes:

Thematic verbs of the second class in which a consonant or u came into contact with the suffix ye/o- suffered various phonetic changes. Such verbs fall partly into the 3rd Conjugation—giving rise to an irregular form of it—and partly into the 4th, and some have forms of both.

In all these cases many cross-analogies and errors as well as phonetic changes have been at work to produce irregularities. Hence has arisen the traditional system which is practically represented in §§ 175-176 below.

175. The Present Stem may be found by dropping -re in the Present Infinitive.

176. The Present Stem is formed from the Root in all regular verbs in one of the following ways.

Note— Verb stems of these conjugations are almost all really formed from noun stems on the pattern of older formations (see § 174, above).

b. In the 3rd Conjugation, by adding a short vowel e/o4 to the root. In Latin this e/o usually appears as i/u, but e is preserved in some forms.

c. The root may be changed:

d. In some verbs the Present stem is formed from a noun stem in u-

Note 1— A few isolated forms use the simple root as a present stem.

These are counted as irregular.

Note 2— In some verbs the final consonant of the root is doubled before the stem vowel.

e. Some verbs have roots ending in a vowel. In these the Present stem is generally identical with the root.

But others, as rui-mus (RU), are formed with an additional vowel according to the analogy of the verbs described in d.

Note— Some verbs of this class reduplicate the root: as, si-st-e-re (STA, cf. stāre).

3. Most verbs of the 1st, 2nd, and 4th Conjugations form the Present stem by adding the suffix -ye/o- to a noun stem. The ā of the 1st Conjugation is the stem-ending of the noun (plantā-re, from plantā-, stem of planta). The ē of the 2nd and the ī of the 4th Conjugation are due to contraction of the short vowel of the noun stem with the ending -ye/o- . Thus albēre is from albo/e-, stem of albus; fīnīre is from fīni-, stem of fīnis. Some verbs of these classes, however, come from roots ending in a vowel.

4. This is the so-called “thematic vowel.”

6. These are either old formations in -ye/o- in which the y has disappeared after the u (statuō for †statu-yō） or later imitations of such forms.

7. In some of the verbs of this class the present stem was originally identical with the root; in others the ending -ye/o- was added, but has been absorbed by contraction. 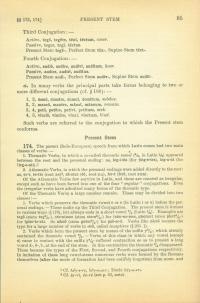 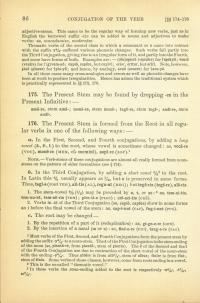 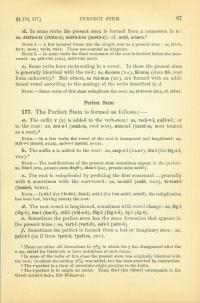