Tenses of the Infinitive in Indirect Discourse

584. The present, the perfect, or the future infinitive1 is used in indirect discourse, according as the time indicated is present, past, or future with reference to the verb of saying, etc., by which the indirect discourse is introduced.

Dīcit sē cadere.
He says he is falling.

Dīxit sē cadere.
He said he was falling.

Cecidī.
I fell.
(have fallen)

Dīcit sē cecidisse.
He says he was falling.
(fell, has fallen, had fallen)

Ceciderō.
I shall have fallen.

Dīcit fore ut ceciderit. [rare]
He says he shall have fallen.

Dīxit fore ut cecidisset. [rare]
He said he should have fallen.

a. All varieties of past time are usually expressed in indirect discourse by the perfect infinitive, which may stand for the imperfect, the perfect, or the pluperfect indicative of the direct.

Note— Continued or repeated action in past time is sometimes expressed by the present infinitive, which in such cases stands for the imperfect indicative of the direct discourse and is often called the Imperfect Infinitive.

This is the regular construction after meminī when referring to a matter of actual experience or observation.

b. The present infinitive posse often has a future sense.

1.For various ways of expressing the future infinitive, see § 164.3.c. 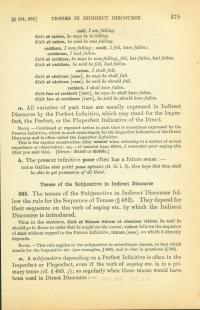