456. Verbs which imply another action of the same subject to complete their meaning take the Infinitive without a subject accusative. Such are verbs denoting to be able, dare, undertake, remember, forget, be accustomed, begin, continue, cease, hesitate, learn, know how, fear, and the like.

Loquī posse coepī.
I began to be able to speak.

Note— The peculiarity of the Complementary Infinitive construction is that no subject accusative is in general admissible or conceivable. But some infinitives usually regarded as objects can hardly be distinguished from this construction when they have no subject expressed. Thus volō dīcere and volō mē dīcere mean the same thing (I wish to speak), but the latter is an object infinitive, while the former is not apparently different in origin and construction from queō dīcere (complementary infinitive), and again volō eum dīcere (I wish him to speak) is essentially different from either (cf. § 563.b).

457. Many verbs take either a subjunctive clause or a complementary infinitive, without difference of meaning. Such are verbs signifying willingness, necessity, propriety, resolve, command,prohibition, effort, and the like (cf. § 563)

Bellum gerere cōnstituit (id. 4.6)
He decided to carry on war.

Note 1— For the infinitive with subject accusative used with some of these verbs instead of a complementary infinitive, see § 563.

Note 2— Some verbs of these classes never take the subjunctive, but are identical in meaning with others which do.

a. In poetry and later writers many verbs may have the infinitive, after the analogy of verbs of more literal meaning that take it in prose.

458. A Predicate Noun or Adjective after a Complementary Infinitive takes the case of the subject of the main verb.

Brevis esse labōrō, obscūrus fīō (Hor. A. P. 25)
I struggle to be brief, I become obscure. 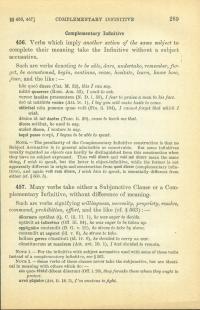 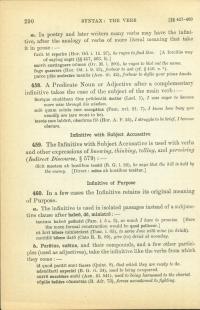