Infinitive as the Subject of an Impersonal

454. The infinitive is used as the apparent subject with many impersonal verbs and expressions. Such are libet, licet, oportet, decet, placet, vīsum est, pudet, piget, necesse est, opus est, etc.

Neque mē vīxisse paenitet. (id. 84)
I do not feel sorry to have lived.

Note— This use is a development of the Complementary Infinitive (§ 456); but the infinitives approach the subject construction and may be conveniently regarded as the subjects of the impersonals.

455. With impersonal verbs and expressions that take the infinitive as an apparent subject, the personal subject of the action may be expressed:

a. A predicate noun or adjective is commonly in the accusative; but with licet regularly, and with other verbs occasionally, the dative is used.

Expedit bonās esse vōbīs (Ter. Haut. 388)
It is for your advantage to be good.

Licuit esse ōtiōsō Themistoclī. (Tusc. 1.33)
Themistocles might have been inactive.
(It was allowed to Themistocles to be inactive)

Nōn est omnibus stantibus necesse dīcere. (Marc. 33)
It is not necessary for all to speak standing.

Note— When the subject is not expressed, as being indefinite (one, anybody), a predicate noun or adjective is regularly in the accusative (cf. § 452.3, Note 2). 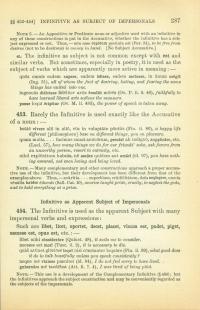 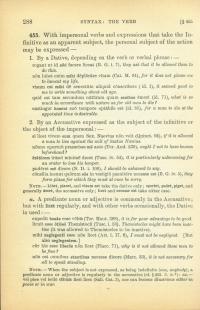