529. The subjunctive in the clause of purpose is hortatory in origin, coming through a kind of indirect discourse construction (for which see § 592). Thus, mīsit lēgātōs quī dīcerent means he sent ambassadors who should say, i.e. who were directed to say; in the direct orders the verb would be dīcite, which would become dīcant in the indirect discourse of narrative (§ 588) or dīcerent in the past (cf. hortatory subjunctive in past tenses, § 439.b). The subjunctive with ut and nē is, in general, similar in origin.

530. A clause expressing purpose is called a Final Clause.

531. Final Clauses take the subjunctive introduced by ut (utī), negative nē (ut nē), or by a relative pronoun or adverb.

a. The ablative quō ( = ut eō) is used as a conjunction in final clauses which contain a comparative.

Note— Occasionally quō introduces a final clause that does not contain a comparative.

532. The principal clause, on which a final clause depends, is often to be supplied from the context.

Sed ut eōdem revertar, causa haec fuit timōris. (Fam. 6.7.3)
But, to return to the same point, this was the cause of fear.

Note 1— By a similar ellipsis the subjunctive is used with nēdum, sometimes nē (still less, not to mention that).

Nēdum in marī et viā sit facile (Fam. 16.8)
Still less is it easy at sea and on a journey.

Note 2— With nēdum the verb itself is often omitted.

533. The purpose of an action is expressed in Latin in various ways; but never (except in idiomatic expressions and rarely in poetry) by the simple Infinitive as in English (§ 460). The sentence, They came to seek peace, may be rendered:

These forms are not used indifferently, but:

a. The usual way of expressing purpose is by ut (negative nē), unless the purpose is closely connected with some one word, in which case a relative is more common.

b. The gerund and gerundive constructions of purpose are usually limited to short expressions, where the literal translation, though not the English idiom, is nevertheless not harsh or strange.

c. The supine is used to express purpose only with verbs of motion, and in a few idiomatic expressions (§ 509).

d. The future participle used to express purpose is a late construction of inferior authority (§ 499.2).

For the poetical Infinitive of Purpose, see § 460.c. For the present participle in a sense approaching that of purpose, see § 490.3. 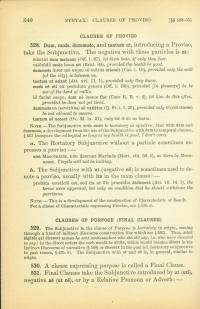 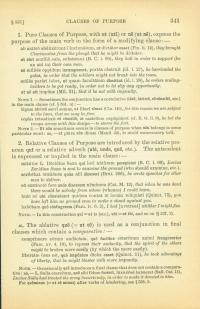 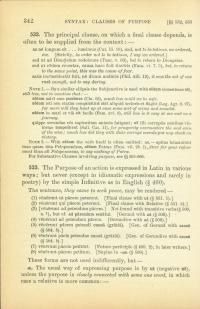 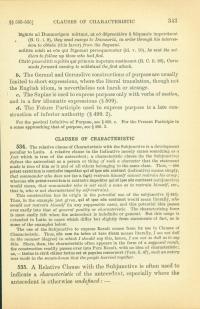