465. The present tense denotes an action or state (1) as now taking place or existing, and so (2) as incomplete in present time, or (3) as indefinite, referring to no particular time, but denoting a general truth.

exspectō quid velīs (Ter. And. 34)
I await your pleasure (what you wish).

Tū āctiōnem īnstituis, ille aciem īnstruit. (Mur. 22)
You arrange a case, he arrays an army.
[The present is here used of regular employment.]

Note— The present of a general truth is sometimes called the Gnomic Present.

a. The present is regularly used in quoting writers whose works are extant.

466. The present with expressions of duration of time (especially iam diū, iam dūdum) denotes an action continuing in the present, but begun in the past (cf. § 471.b). In this use the present is commonly to be rendered by the perfect in English.

Iam diū īgnōrō quid agās. (Fam. 7.9)
For a long time I have not known what you were doing.

Patimur multōs iam annōs. (Verr. 5.126)
We suffer now these many years.
[The Latin perfect would imply that We no longer suffer.]

Annum iam audīs Cratippum. (Off. 1.1)
For a year you have been a hearer of Cratippus.

Note 2— Similarly the present imperative with iam dūdum indicates that the action commanded ought to have been done or was wished for long ago (cf. the perfect imperative in Greek).

467. The present sometimes denotes an action attempted or begun in present time, but never completed at all (Conative Present, cf. § 471.c).

Dēnsōs fertur in hostīs. (id. 2.511)
He starts to rush into the thickest of the foe.

468. The present, especially in colloquial language and poetry, is often used for the Future.

Quod sī fit, pereō funditus (id. 244)
If this happens, I am utterly undone.

Note— Eō and its compounds are especially frequent in this use (cf. Where are you going to-morrow? and the Greek εἶμι in a future sense). Verbs of necessity, possibility, wish, and the like (as possum, volō, etc.) also have reference to the future.

469. The present in lively narrative is often used for the Historical Perfect.

Note— This usage, common in all languages, comes from imagining past events as going on before our eyes (repraesentātiō, § 585.b.Note). For the present indicative with dum (while) see § 556.

a. The present may be used for the perfect in a summary enumeration of past events (Annalistic Present). 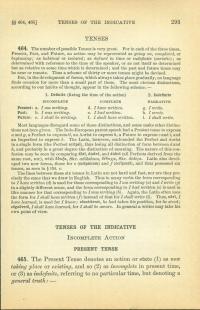 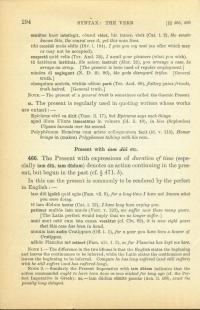 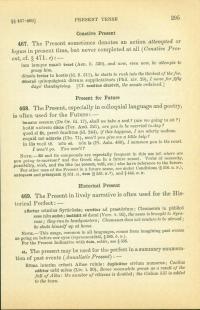