470. The imperfect denotes an action or a state as continued or repeated in past time.

Hunc audiēbant anteā. (Manil. 13)
They used to hear of him before.

Prūdēns esse putābātur. (Lael. 6)
He was (generally) thought wise.
[The perfect would refer to some particular case, and not to a state of things.]

Note— The imperfect is a descriptive tense and denotes an action conceived as in progress or a state of things as actually observed. Hence in many verbs it does not differ in meaning from the Perfect. Thus rēx erat and rēx fuit may often be used indifferently; but the former describes the condition while the latter only states it. The English is less exact in distinguishing these two modes of statement. Hence the Latin imperfect is often translated by the English preterite.

BUT
Id tulit factum graviter Indūtiomārus. (id. 5.4)
Indutiomarus was displeased at this action.
[Here the perfect merely states the fact.]

471. The imperfect represents a present tense transferred to past time. Hence all the meanings which the present has derived from the continuance of the action belong also to the imperfect in reference to past time.

a. The imperfect is used in descriptions.

Erant omnīnō itinera duo ... mōns altissimus impendēbat. (B. G. 1.6)
There were in all two ways . . . a very high mountain overhung.

b. With iam diū, iam dūdum, and other expressions of duration of time, the imperfect denotes an action continuing in the past but begun at some previous time (cf. § 466). In this construction the imperfect is rendered by the English pluperfect.

c. The imperfect sometimes denotes an action as begun (Inceptive Imperfect), or as attempted or only intended (Conative Imperfect; cf § 467).

In exsilium ēiciēbam quem iam ingressum esse in bellum vidēbam? (Cat. 2.14)
Was I trying to send into exile one who I saw had already gone into war?

Sī licitum esset veniēbant. (Verr. 5.129)
They were coming if it had been allowed.
(they were on the point of coming, and would have done so if, etc.)

Note— To this head may be referred the imperfect with iam, denoting the beginning of an action or state.

d. The imperfect is sometimes used to express a surprise at the present discovery of a fact already existing.

Ā miser! quantā labōrābās Charybdī! (Hor. Od. 1.27.19)
Unhappy boy, what a whirlpool you are struggling in [and I never knew it]!

e. The imperfect is often used in dialogue by the comic poets where later writers would employ the perfect.

ad amīcum Calliclem quoi rem aībatmandāsse hīc suam (Pl. Trin. 956)
to his friend Callicles, to whom, he said, he had intrusted his property

Note— So, in conversation the imperfect of verbs of saying (cf. as I was saying) is common in classic prose.

at medicī quoque, ita enim dīcēbās, saepe falluntur (N. D. 3.15)
but physicians also—for that is what you were saying just now—are often mistaken.

Haec mihi ferē in mentem veniēbant, etc. (id. 2.67, 168)
This is about what occurred to me, etc.
[In a straightforward narration this would be vēnērunt.]

f. The imperfect with negative words often has the force of the English auxiliary could or would.

Itaque (Dāmoclēs) nec pulchrōs iliōs ministrātōrēs aspiciēbat. (Tusc. 5.62)
Therefore he could not look upon those beautiful slaves.
[In this case did not would not express the idea of continued prevention of enjoyment by the overhanging sword.]

Nec enim dum eram vōbīscum animum meum vidēbātis. (Cat. M. 79)
For, you know, while I was with you, you could not see my soul.
[Here the perfect would refer only to one moment.]

For the Epistolary Imperfect, see § 479; for the imperfect indicative in apodosis contrary to fact, see § 517.b-c. 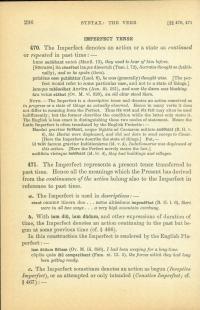 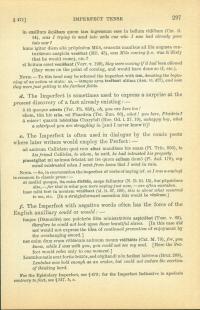