432. Certain adverbs and adjectives are sometimes used as prepositions.1

b. Ūsque sometimes takes the accusative, but ūsque ad is much more common.

c. The adverbs palam, procul, simul, may be used as prepositions and take the ablative.

Rem crēditōrī palam populō solvit. (Liv. 6.14)
He paid the debt to his creditor in the presence of the people.

haud procul castrīs in modum mūnicipī exstrūcta (Tac. H. 4.22)
not far from the camp, built up like a town

434. Some prepositions and adverbs which imply comparison are followed, like comparatives, by quam, which may be separated by several words, or even clauses. Such words are ante, prius, post, posteā, prīdiē, postrīdiē; also magis and prae in compounds.

Neque ante dīmīsit eum quam fidem dedit. (Liv. 39.10)
Nor did he let him go until he gave a pledge.

post diem tertium quam dīxerat (Mil. 44)
the third day after he said it

Catō ipse iam servīre quam pūgnāre māvult. (Att. 7.15)
Cato himself by this time had rather be a slave than fight.

Gallōrum quam Rōmānōrum imperia praeferre (B. G. 1.17)
[they] prefer the rule of Gauls to that of Romans.

Note— The Ablative of Time is sometimes followed by quam in the same way (§ 424.f).

cûius ā mē corpus est cremātum, quod contrā decuit ab illō meum (Cat. M. 84)
whose body I burned [on the funeral pile], while on the contrary (contrary to which) mine should have been burned by him. 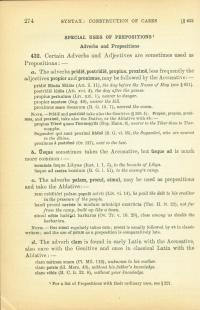 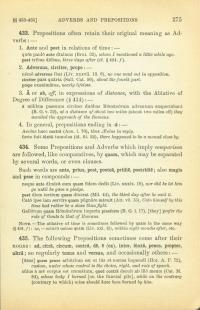