426. Relations of Place1 are expressed as follows.

427. With names of towns and small islands, and with domus and rūs, the Relations of Place are expressed as follows.

a. The locative case is also preserved in the following nouns, which are used (like names of towns) without a preposition:

428. Special uses of place from which, to which, and where are the following.

a. With names of towns and small islands ab is often used to denote from the vicinity of, and ad to denote towards, to the neighborhood of.

ut ā Mutinā discēderet (Phil. 14.4)
that he should retire from Modena (which he was besieging)

Erat ā Gergoviā dēspectus in castra. (B. G. 7.45)
There was from about Gergovia a view into the camp.

Ad Alesiam perveniunt. (id. 7.79)
They arrive at Alesia.
(i.e. in the neighborhood of the town)

b. The general words urbs, oppidum, īnsula require a preposition to express the place from which, to which, or where.

c. With the name of a country, ad denotes to the borders; in with the accusative, into the country itself. Similarly ab denotes away from the outside; ex, out of the interior.

Thus ad Ītaliam pervēnit would mean she came to the frontier, regardless of the destination; in Ītaliam She went to Italy, i.e. to a place within it, to Rome, for instance.

So ab Ītaliā profectus est would mean he came away from the frontier, regardless of the original starting-point; ex Ītaliā he came from Italy, from within, as from Rome, for instance.

d. With all names of places at, meaning near (not in), is expressed by ad or apud with the accusative.

Note 2— In citing an author, apud is regularly used; in citing a particular work, in. Thus, apud Xenophōntem (in Xenophon) but, in Xenophōntis Oeconomicō (in Xenophon's Œconomicus).

e. Large islands, and all places when thought of as a territory and not as a locality, are treated like names of countries.

f. The ablative without a preposition is used to denote the place from which in certain idiomatic expressions.

g. The poets and later writers often omit the preposition with the place from which or to which when it would be required in classical prose.

terram Hesperiam veniēs. (id. 2.781)
you shall come to the Hesperian land.

h. In poetry the place to which is often expressed by the dative, occasionally also in later prose.

Facilis dēscēnsus Avernō. (id. 6.126)
Easy is the descent to Avernus.

i. The preposition is not used with the supine in -um (§ 509) and in the following old phrases.

j. When two or more names of place are used with a verb of motion, each must be under its own construction.

Quadriduō quō haec gesta sunt rēs ad Chrȳsogonum in castra L. Sullae Volā terrās dēfertur. (Rosc. Am. 20)
Within four days after this was done, the matter was reported TO Chrysogonus IN Sulla's camp AT Volaterrœ.

Note— The accusative with or without a preposition is often used in Latin when motion to a place is implied but not expressed in English (see k, Note).

k. Domum denoting the place to which, and the locative domī, may be modified by a possessive pronoun or a genitive.

domī meae
at my house

domī suae vel aliēnae
at his own or another's house

Note— At times when thus modified, and regularly when otherwise modified, in domum or in domō is used.

In domum prīvātam conveniunt. (Tac. H. 4.55)
They come together in a private house.

429. The place where is denoted by the ablative without a preposition in the following instances.

a. The way by which is put in the ablative without a preposition.

Note— In this use the way by which is conceived as the means of passage.

b. Position is frequently expressed by the ablative with ab (rarely ex), properly meaning from.4

ā tergō
in the rear

ā sinistrā
on the left hand

ā parte Pompêiānā
on the side of Pompey

ex alterā parte
on the other side

māgnā ex parte
in a great degree
(from, i.e. in, a great part)

quī in sēde ac domō collocāvit (Par. 25)
who put [one] into his place and home

sī in ūnō Pompêiō omnia pōnerētis (id. 59)
if you made everything depend on Pompey alone

Note— Compounds of pōnō take various constructions (see the Lexicon under each word).

in quibus causa nītitur (Cael. 25)
on whom the case depends

With several of these verbs the neuter accusative of pronouns is often found. For fīdō and cōnfīdō with the Dative, see § 367.

a. The verbals frētus, contentus, and laetus take the locative ablative.

laetus praedā
rejoicing in the booty

contentus sorte
content with his lot
[Possibly Ablative of Cause]

1. Originally all these relations were expressed by the cases alone. The accusative, in one of its oldest functions, denoted the end of motion; the ablative, in its proper meaning of separation, denoted the place from which, and, in its locative function, the place where. The prepositions, originally adverbs, were afterwards added to define more exactly the direction of motion (as in to usward, toward us), and by long association became indispensable except as indicated below.

3. The English home in this construction is, like domum, an old accusative of the end of motion. 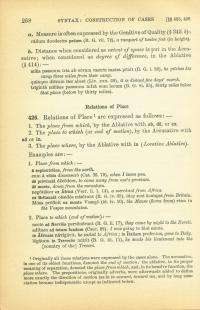 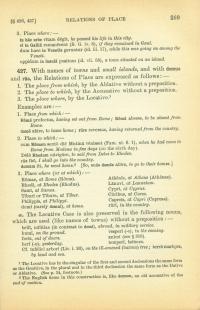 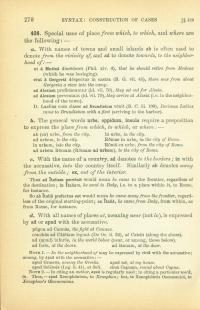 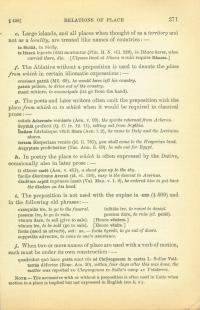 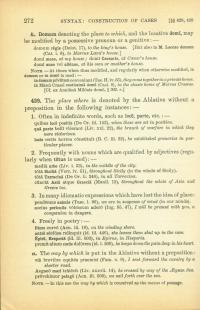 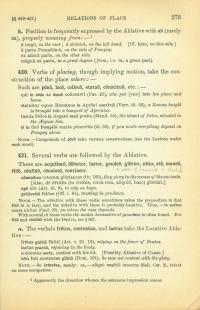