436. The syntax of the verb relates chiefly to the use of the moods (which express the manner in which the action is conceived) and the tenses (which express the time of the action). There is no difference in origin between mood and tense; and hence the uses of mood and tense frequently cross each other. Thus the tenses sometimes have modal significations (compare Indicative in Apodosis, § 517.c; Future for Imperative, § 449.b); and the moods sometimes express time (compare Subjunctive in Future Conditions, § 516.b, and notice the want of a Future Subjunctive).

The parent language had, besides the imperative mood, two or more forms with modal signification. Of these, the subjunctive appears with two sets of terminations, -ā-m, -ā-s, in the present tense (moneam, dīcam), and -ē-m, -ē-s, in the present (amem) or other tenses (essem, dīxissem). The optative was formed by iē-, ī-, with the present stem (sim, duim) or the perfect (dīxerim). (See details in § 168 - § 169.)

It must not be supposed, however, that in any given construction either the subjunctive or the optative was deliberately used because it denoted conception or possibility. On the contrary, each construction has had its own line of development from more tangible and literal forms of thought to more vague and ideal; and by this process the mood used came to have in each case a special meaning, which was afterwards habitually associated with it in that construction. Similar developments have taken place in English. Thus, the expression I would do this has become equivalent to a mild command, while by analysis it is seen to be the apodosis of a present condition contrary to fact (§ 517): if I were you, etc. By further analysis, I would do is seen to have meant, originally, I should have wished (or I did wish) to do.

In Latin, the original subjunctive and the optative became confounded in meaning and in form, and were merged in the subjunctive, at first in the present tense. Then new tense forms of the subjunctive were formed,1 and to these the original as well as the derived meanings of both moods became attached (see § 438). All the independent uses of the Latin subjunctive are thus to be accounted for.

The dependent uses of the subjunctive have arisen from the employment of some independent subjunctive construction in connection with a main statement. Most frequently the main statement is prefixed to a sentence containing a subjunctive, as a more complete expression of a complex idea (§ 268). Thus a question implying a general negative (Quīn rogem? Why shouldn't I ask?) might have the general negative expressed in a prefixed statement (Nūlla causa est. There is no reason.); or Abeat. Let him go away, may be expanded into Sine abeat. When such a combination comes into habitual use, the original meaning of the subjunctive partially or wholly disappears and a new meaning arises by implication. Thus, in Mīsit lēgātōs quī dīcerent, etc. He sent ambassadors to say, etc. (i.e. who should say), the original hortatory sense of the subjunctive is partially lost, and the mood becomes in part an expression of purpose. Similar processes may be seen in the growth of apodosis. Thus, tolle hanc opīniōnem, lūctum sustuleris (remove this notion, you will have done away with grief; i.e. if you remove, etc.).

The infinitive is originally a verbal noun (§ 451), modifying a verb like other nouns: volō vidēre, lit. I wish for-seeing; compare English “What went ye out for to see?” But in Latin it has been surprisingly developed, so as to have forms for tense, and some proper modal characteristics, and to be used as a substitute for finite moods.

The other noun and adjective forms of the verb have been developed in various ways, which are treated under their respective heads below.

The proper verbal constructions may be thus classified. 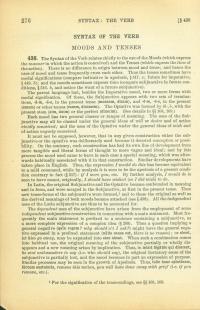 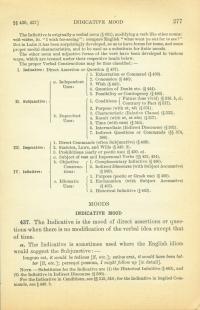