488. The participle expresses the action of the verb in the form of an Adjective, but has a partial distinction of tense and may govern a case.

489. Participles denote time as present, past, or future with respect to the time of the verb in their clause. Thus the present participle represents the action as in progress at the time indicated by the tense of the verb, the perfect as completed, and the future as still to take place.

490. The present participle has several of the special uses of the present indicative. Thus it may denote—

491. The perfect participle of a few deponent verbs is used nearly in the sense of a Present. Such are, regularly, ratus, solitus, veritus; commonly, arbitrātus, fīsus, ausus, secūtus, and occasionally others, especially in later writers.

cohortātus mīlitēs docuit (B. C. 3.80)
encouraging the men, he showed

Note— These constructions are often used when a participle might be employed.

dum [Ulixēs] sibi, dum sociīs reditum parat (Hor. Ep. 1.2.21)
Ulysses, while securing the return of himself and his companions.
[In Greek: ἀρνύμενος.]

493. The Latin has no perfect participle in the active voice. The deficiency is supplied— 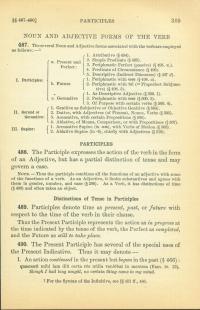 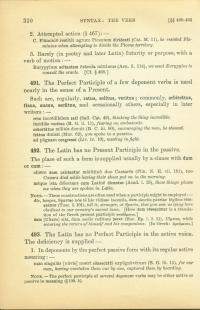 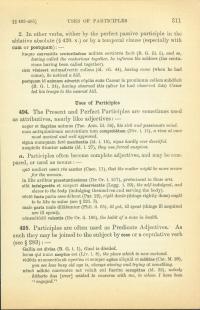