269. A sentence is a form of words which contains a statement, a question, an exclamation, or a command.

a. A sentence in the form of a statement is called a Declarative Sentence.

b. A sentence in the form of a question is called an Interrogative Sentence.

Canisne currit?  Does the dog run?

c. A sentence in the form of an exclamation is called an Exclamatory Sentence.

d. A sentence in the form of a command, an exhortation, or an entreaty is called an Imperative Sentence.

Ī, curre per Alpīs.  Go, run across the Alps.

270. Every sentence consists of a subject and a predicate. The subject of a sentence is the person or thing spoken of. The predicate is that which is said of the subject. Thus in Canis currit (The dog runs), canis is the subject, and currit the predicate.

271. The subject of a sentence is usually a noun or pronoun, or some word or group of words used as a noun.

Quaeritur num mors malum sit.  The question is whether death is an evil.

a. But in Latin the subject is often implied in the termination of the verb.

272. The predicate of a sentence may be a verb (as in, Canis currit  The dog runs), or it may consist of some form of sum and a noun or adjective which describes or defines the subject (as in Caesar cōnsul erat  Cæsar was consul). Such a noun or adjective is called a Predicate Noun or Adjective, and the verb sum is called the Copula (i.e. the connective). Thus in the example given, Caesar is the subject, cōnsul the predicate noun, and erat the copula (see § 283).

273. Verbs are either Transitive or Intransitive.

a. With certain verbs, the genitive, dative, or ablative is used where the English, from a difference in meaning, requires the direct object (Objective).

b. Many verbs transitive in Latin are rendered into English by an intransitive verb with a preposition.

Petit aprum.  He aims at the boar.

Laudem affectat.  He strives after praise.

275. When a transitive verb is changed from the active to the passive voice, the direct object becomes the subject and is put in the nominative case.

Passive: Fīlius ā patre vocātur.  The son is called by his father.

a. A single modifying word may be an adjective, an adverb, an appositive (§ 282), or the oblique case of a noun. Thus in the sentence

b. The modifying word is in some cases said to limit the word to which it belongs. Thus in the sentence

the genitive puerī limits patrem by excluding any other father.

277. A Phrase is a group of words, without subject or predicate of its own, which may be used as an adjective or an adverb. Thus in the sentence

Vir fuit summā nōbilitāte.  He was a man of the highest nobility.

the words summā nōbilitāte (of the highest nobility) are used for the adjective nōbilis (noble) or nōbilissimus (very noble) and are called an Adjective Phrase.

So in the sentence

the words māgnā celeritāte (with great speed) are used for the adverb celeriter (quickly) or celerrimē (very quickly) and are called an Adverbial Phrase. 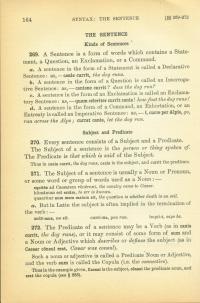 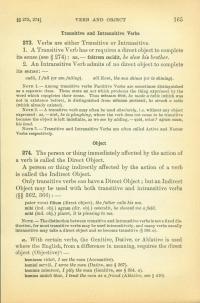 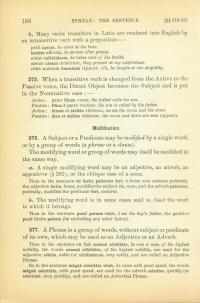