509. The supine in -um is used after verbs of motion to express purpose. It may take an object in the proper case.

Note 1— The supine in -um is especially common with eō, and with the passive infinitive īrī forms the future infinitive passive.

sī scīret sē trucīdātum īrī (Div. 2.22)
if he (Pompey) had known that he was going to be murdered
[Rare except in Cicero. For the more usual way of expressing the future passive infinitive, see § 569.3.a.]

Note 2— The supine in -um is occasionally used when motion is merely implied.

510. The supine in -ū1 is used with a few adjectives and with the nouns fās, nefās, and opus, to denote an action in reference to which the quality is asserted.

rem nōn modo vīsū foedam, sed etiam audītū (Phil. 2.63)
a thing not only shocking to see, but even to hear of

Vidētis nefās esse dictū miseram fuisse tālem senectūtem. (Cat. M. 13)
You see it is a sin to say that such an old age was wretched.

Note 1— The supine in -ū is thus in appearance an Ablative of Specification (§ 418).

Note 2— The supine in -ū is found especially with such adjectives as indicate an effect on the senses or the feelings, and those which denote ease, difficulty, and the like. But with facilis, difficilis, and iūcundus, ad with the gerund is more common.

Nec vīsū facilis nec dictū adfābilis ūllī. (Aen. 3.621)
He is not pleasant for any man to look at or address.

Note 3— With all these adjectives the poets often use the Infinitive in the same sense.

Note 4— The supine in -ū with a verb is extremely rare. 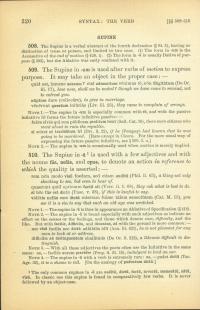