511. The conditional sentence differs from other complex sentences in that the form of the main clause (APODOSIS) is determined in some degree by the nature of the subordinate clause (PROTASIS) upon the truth of which the whole statement depends. Like all complex sentences, however, the conditional sentence has arisen from the use of two independent sentence forms to express the parts of a thought which was too complicated to be fully expressed by a simple sentence. But because the thoughts thus expressed are in reality closely related, as parts of a single whole, the sentences which represent them are also felt to be mutually dependent, even though the relation is not expressed by any connecting word. Thus, speak the word: my servant shall be healed is a simpler and an earlier form of expression than If thou speak the word, etc.

The conditional particles were originally pronouns without conditional meaning: thus, sī (if) is a weak demonstrative of the same origin as sīc, so [sī-ce like hī-ce, see § 215.5], and had originally the meaning of in that way, or in some way. Its relative sense (if) seems to have come from its use with sīc to make a pair of correlatives: thus . . . thus (see § 512.b).

In its origin the conditional sentence assumed one of two forms. The condition was from the first felt to be a condition, not a fact or a command; but, as no special sentence form for a condition was in use, it employed for its expression either a statement of fact (with the indicative) or a form of mild command (the subjunctive). From the former have come all the uses of the Indicative in protasis; from the latter all the uses of the subjunctive in protasis. The apodosis has either (1) the indicative, expressing the conclusion as a fact, and the present and perfect subjunctive, expressing it originally as future— and hence more or less doubtful—or (2) the imperfect and pluperfect subjunctive expressing it as futūrum in praeteritō,1 and so unfulfilled in the present or past. Thus, rīdēs, mâiōre cachinnō concutitur (You laugh, he shakes with more boisterous laughter), is the original form for the indicative in protasis and apodosis; sī rīdēs originally means merely

For the classification of Conditional Sentences, see § 513.

1. The futūrum in praeteritō is a tense future relatively to a time absolutely past. It denotes a future act transferred to the point of view of past time , and hence is naturally expressed by a past tense of the Subjunctive: thus dīxisset (he would have said) = dictūrus fuit [he was about to say (but did not)]. As that which looks towards the future from some point in the past has a natural limit in present time, such a tense (the imperfect subjunctive) came naturally to be used to express a presentcondition purely ideal, that is to say, contrary to fact.

3. There are, however, some cases in which this implication does not arise.

4. “There was a certain lender which ought him five hundred pieces.” -Tyndale's New Testament. 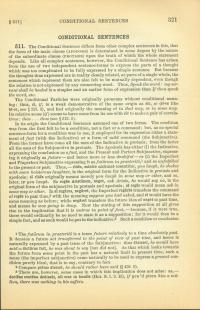 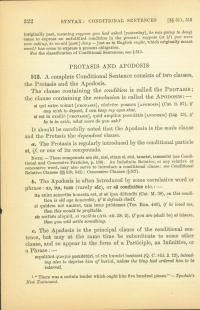