482. The tenses of the subjunctive in dependent clauses follow special rules for the Sequence of Tenses. With reference to these rules all tenses when used in independent clauses are divided into two classes—Primary and Secondary.

Note— To these may be added certain forms less commonly used in independent clauses:

The Perfect Definite is sometimes treated as primary (see § 485.a). For the Historical Present, see § 485.e; for the Imperfect Subjunctive in Apodosis, see § 485.h.

483. The following is the general rule for the Sequence of Tenses.1

In complex sentences a primary tense in the main clause is followed by the present or perfect in the dependent clause, and a secondary tense by the imperfect or pluperfect.

484. In applying the rule for the Sequence of Tenses, observe—

a. If the leading verb is primary, the dependent verb must be in the present if it denotes incomplete action, in the perfect if it denotes completed action.

c. Notice that the future perfect denotes action completed (at the time referred to), and hence is represented in the subjunctive by the perfect or pluperfect.

485. In the Sequence of Tenses the following special points are to be noted.

a. The perfect indicative is ordinarily a secondary tense, but allows the primary sequence when the present time is clearly in the writer's mind.

Ut satis esset praesidī prōvīsum est. (Cat. 2.26)
Provision has been made that there should be ample guard.
[secondary sequence]

Est enim rēs iam in eum locum adducta, ut quamquam multum intersit inter eōrum causās quī dīmicant, tamen inter victōriās nōn multum interfutūrum putem. (Fam. 5.21.3)
For affairs have been brought to such a pass that, though there is a great difference between the causes of those who are fighting, still I do not think there will be much difference between their victories.
[primary sequence]

Note— The perfect infinitive in exclamations follows the same rule.

Adeōn rem redīsse patrem ut extimēscam (Ter. Ph. 153)
To think that things have come to such a pass that I should dread my father!
[primary]

c. In clauses of Result, the Perfect Subjunctive is regularly (the Present rarely) used after secondary tenses.

[Siciliam Verrēs] per triennium ita vexāvit ac perdidit ut ea restituī in antīquum statum nūllō modō possit. (Verr. 1.12)
For three years Verres so racked and ruined Sicily that she can in no way be restored to her former state.
[Here the present describes a state of things actually existing.]

Note 1— This construction emphasizes the result; the regular sequence of tenses would subordinate it.

Note 2— There is a special fondness for the perfect subjunctive to represent a perfect indicative.

d. A general truth after a past tense follows the sequence of tenses.

Ex hīs quae tribuisset, sibi quam mūtābilis esset reputābat. (Q. C. 3.8.20)
from what she (Fortune) had bestowed on him, he reflected how inconstant she is.
[direct: mūtābilis est]

Note— In English the original tense is more commonly kept.

e. The Historical Present (§ 469) is sometimes felt as a primary, sometimes as a secondary tense, and accordingly it takes either the primary or the secondary sequence.

Rogat ut cūret quod dīxisset. (Quinct. 18)
He asks him to attend to the thing he had spoken of.
[Both primary and secondary sequence.]

g. The imperfect and pluperfect in conditions contrary to fact (§ 517) and in the Deliberative Subjunctive (§ 444) are not affected by the sequence of tenses.

quia tāle sit, ut vel sī īgnōrārent id hominēs vel sī obmutuissent (Fin. 2.49)
because it is such that even if men WERE ignorant of it, or HAD BEEN silent about it

h. The imperfect subjunctive in present conditions contrary to fact (§ 517) is regularly followed by the secondary sequence.

Sī aliī cōnsulēs essent, ad tē potissimum, Paule, mitterem, ut eōs mihi quam amīcissimōs redderēs. (Fam. 15.13.3)
If there were other consuls, I should send to you, Paulus, in preference to all, that you might make them as friendly to me as possible.

i. The present is sometimes followed by a secondary sequence, seemingly because the writer is thinking of past time.

Sed sī rēs cōget, est quiddam tertium, quod neque Seliciō nec mihi displicē bat: ut neque iacēre rem paterēmur, etc. (Fam. 1.5 A.3)
But if the case shall demand, there is a third [course] which neither Selicius nor myself disapproved, that we should not allow, etc.
[Here Cicero is led by the time of displicēbat]

j. When a clause depends upon one already dependent, its sequence may be secondary if the verb of that clause expresses past time, even if the main verb is in a primary tense.

Note— So regularly after a perfect infinitive which depends on a primary tense (§ 585.a).

1. The term is sometimes extended to certain relations between the tenses of subordinate verbs in the indicative and those of the main verb. These relations do not differ in principle from those which we are considering; but for convenience the term Sequence of Tenses is in this book restricted to subjunctives, in accordance with the usual practice. 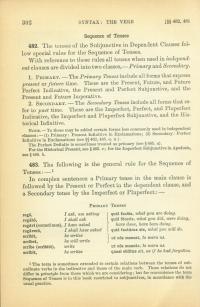 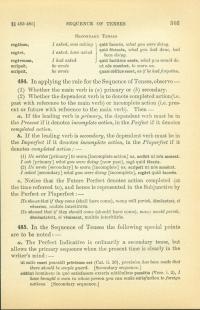 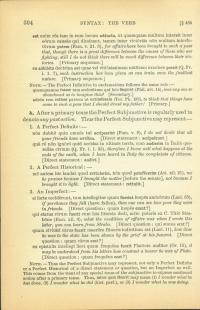 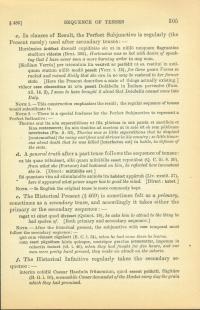 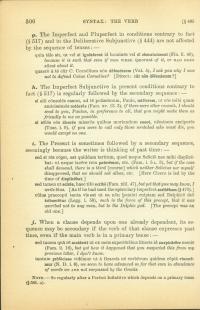