Tenses of the Subjunctive

480. The tenses of the subjunctive in independent clauses denote time in relation to the time of the speaker. The present always refers to future (or indefinite) time, the imperfect to either past or present, the perfect to either future or past, the pluperfect always to past.

Note— The so-called Sequence of Tenses is not a mechanical law. Each tense of the subjunctive in dependent clauses (as in independent) originally denoted its own time in relation to the time of the speaker, though less definitely than the corresponding tenses of the indicative. Gradually, however, as the complex sentence was more strongly felt as a unit, certain types in which the tenses of the dependent clause seemed to accord with those of the main clause were almost unconsciously regarded as regular, and others, in which there was no such agreement, as exceptional. Thus a pretty definite system of correspondences grew up, which is codified in the rules for the Sequence of Tenses. These, however, are by no means rigid. They do not apply with equal stringency to all dependent constructions, and they were frequently disregarded, not only when their strict observance would have obscured the sense, but for the sake of emphasis and variety, or merely from carelessness. 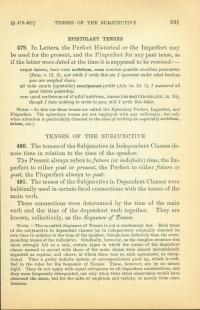