Tenses of the Infinitive

a. With past tenses of verbs of necessity, propriety, and possibility (as dēbuī, oportuit, potuī), the present infinitive is often used in Latin where the English idiom prefers the perfect infinitive.

b. With verbs of necessity, propriety, and possibility, the perfect infinitive may be used to emphasize the idea of completed action.

tametsī statim vīcissedēbeō (Rosc. Am. 73)
although I ought to win my case at once
(to be regarded as having won it)

bellum quod possumus ante hiemem perfēcisse (Liv. 37.19.5)
a war which we can have completed before winter

Note— With the past tenses of these verbs the perfect infinitive is apparently due to attraction.

quod iam prīdem factum esse oportuit (Cat. 1.5)
(a thing) which ought to have been done long ago.

haec facta ab illō oportēbat (Ter. Haut. 536)
This ought to have been done by him.

Tum decuit metuisse. (Aen. 10.94)
Then was the time to fear.
(then you should have feared)

c. In archaic Latin and in legal formulas the perfect active infinitive is often used with nōlō or volō in prohibitions.

Chaldaeum nēquem cōnsuluisse velit (Cato R. R. 5.4)
Let him not venture to have consulted a soothsayer.

NEIQVIS EORVM BACANAL HABVISE VELET (S. C. de Bac. 1)
Let no one of them venture to have had a place for Bacchanalian worship.

d. With verbs of wishing1 the perfect passive infinitive (commonly without esse) is often used emphatically instead of the present.

quī illam [patriam] exstīnctam cupit (Fin. 4.66)
who is eager for her utter destruction

Illud tē esse admonitum volō. (Cael. 8)
I wish you to be well advised of this.

quī sē ab omnibus dēsertōs potius quam abs tē dēfēnsōs essemālunt (Caecil. 21)
who prefer to be deserted by all rather than to be defended by you

Note— The participle in this case is rather in predicate agreement (with or without esse) than used to form a strict perfect infinitive, though the full form can hardly be distinguished from that construction.

e. In late Latin, and in poetry (often for metrical convenience), rarely in good prose, the perfect active infinitive is used emphatically instead of the present, and even after other verbs than those of wishing.

Haud equidem premendō alium mē extulisse velim. (Liv. 22.59.10)
I would not exalt myself by crushing another.

f. After verbs of feeling the perfect infinitive is used, especially by the poets, to denote a completed action. So also with satis est, satis habeō, melius est, contentus sum, and in a few other cases where the distinction of time is important.

Sunt quōs pulverem Olympicum collēgisseiuvat (Hor. Od. 1.1.3)
Some delight to have stirred up the dust at Olympia.

Quiēsse erit melius (Liv. 3.48)
It will be better to have kept quiet. 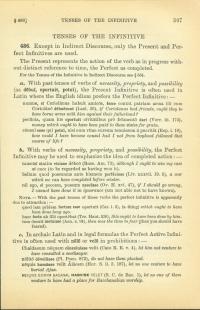 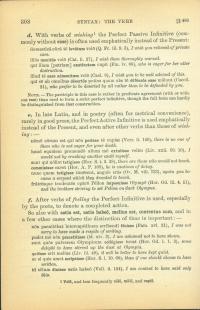