299. The reflexive pronoun (sē), and usually its corresponding possessive (suus), are used in the predicate to refer to the subject of the sentence or clause.

Contemnī sē putant. (Cat. M. 65)
They think they are despised.

Caesar statuit sibi Rhēnum esse trānseundum. (id. 4.16)
Cæsar decided that he must cross the Rhine (the Rhine must be crossed by himself).

a. For reflexives of the 1st and 2nd persons the oblique cases of the personal pronouns (meī, tuī, etc.) and the corresponding possessives (meus, tuus, etc.) are used.

Mortī mē obtulī. (Mil. 94)
I have exposed myself to death.

Quid est quod tantīs nōs in labōribus exerceāmus? (Arch. 28)
What reason is there why we should exert ourselves in so great toils?

300. In a subordinate clause of a complex sentence there is a double use of reflexives.

a.If the subordinate clause does not express the words or thought of the main subject, the reflexive is not regularly used, though it is occasionally found.

Sunt ita multī ut eōs carcer capere nōn possit. (Cat. 2.22)
They are so many that the prison cannot hold them.
[Here sē could not be used; so also in the example following.]

Ibi in proximīs vīllīs ita bipartītō fuērunt, ut Tiberis inter eōs et pōns interesset. (id. 3.5)
There they stationed themselves in the nearest farmhouses, in two divisions, in such a manner that the Tiber and the bridge were between them (the divisions).

Nōn fuit eō contentus quod eī praeter spem acciderat. (Manil. 25)
He was not content with that which had happened to him beyond his hope.

Compare:
Quī fit, Maecēnās, ut nēmō, quam sibi sortem seu ratiō dederit seu fors obiēcerit, illā contentus vīvat? (Hor. S. 1.1.1)
How comes it, Mæcenas, that nobody lives contented with that lot which choice has assigned him or chance has thrown in his way?
[Here sibi is used to put the thought into the mind of the discontented man.]

omnia aut ipsōs aut hostēs populātōs (Q. C. 3.5.6)
[they said that] either they themselves or the enemy had laid all waste [Direct reflexive]

Audīstis nūper dīcere lēgātōs Tyndaritānōs Mercurium quī sacrīs anniversāriīs apud eōs colerētur esse sublātum. (Verr. 4.84)
You have just heard the ambassadors from Tyndaris say that the statue of Mercury which was worshiped with annual rites among them was taken away.
[Here Cicero wavers between apud eōs colēbātur, a remark of his own, and apud sē colerētur, the words of the ambassadors. eōs does not strictly refer to the ambassadors, but to the people—the Tyndaritani.]

301. The following are special uses of the reflexive.

a. The reflexive in a subordinate clause sometimes refers to the subject of a suppressed main clause.

b. The reflexive may refer to any noun or pronoun in its own clause which is so emphasized as to become the subject of discourse.

Quī poterat salūs sua cuiquam nōn probārī? (Mil. 81)
How can any one fail to approve his own safety?
[In this and the preceding example the emphasis is preserved in English by the change of voice.]

Note— Occasionally the clause to which the reflexive really belongs is absorbed.

Studeō sānāre sibi ipsōs. (Cat. 2.17)
I am anxious to cure these men for their own benefit. (i.e. ut sānī sibi sint)

c. Suus is used for one's own as emphatically opposed to that of others, in any part of the sentence and with reference to any word in it.

d. The reflexive may depend upon a verbal noun or adjective.

e. The reflexive may refer to the subject implied in an infinitive or verbal abstract used indefinitely.

f. Inter sē (nōs, vōs) among themselves (ourselves, yourselves), is regularly used to express reciprocal action or relation.

inter sē cōnflīgunt (Cat. 1.25)
contend with each other

inter sē continentur (Arch. 2)
are joined to each other 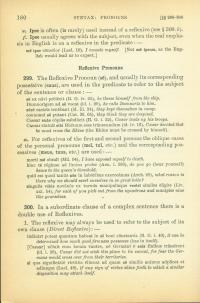 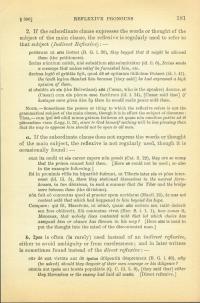 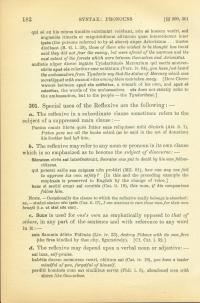 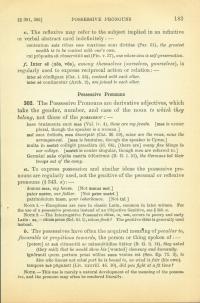