18. Both Latin and English have gone through a series of phonetic changes, different in the two languages, but following definite laws in each. Hence both preserve traces of the older speech in some features of the vowel system, and both show certain correspondences in consonants in words which each language has inherited from the old common stock. Only a few of these correspondences can be mentioned here.

19. The most important correspondences in consonants between Latin and English, in cognate words, may be seen in the following table:1

Note 1— Sometimes a consonant lost in Latin is still represented in English: as, niv- (for †sniv-), Eng. snow; ānser (for †hānser), Eng. goose.

Note 2— From these cases of kindred words in Latin and English must be carefully distinguished those cases in which the Latin word has been taken into English either directly or through some one of the modern descendants of Latin, especially French. Thus faciō is kindred with English do, but from the Latin participle (factum) of this verb comes English fact, and from the French descendant (fait) of factum comes English feat.

1. The Indo-European parent speech had among its consonants voiced aspirates (bh, dh, gh). All these suffered change in Latin, the most important results being, for bh, Latin f, b (English has b, v, or f); for dh, Latin f, b, d (English has d ); for gh, Latin h, g (English has y, g). The other mutes suffered in Latin much less change, while in English, as in the other Germanic languages, they have all changed considerably in accordance with what has been called Grimm's Law for the shifting of mutes.

2. The th in father is a late development. The older form fader seems to show an exception to the rule that English th corresponds to Latin t. The primitive Germanic form was doubtless in accordance with this rule, but, on account of the position of the accent, which in Germanic was not originally on the first syllable in this word, the consonant underwent a secondary change to d.

3. But to the group st of Latin corresponds also English st; as in Latin stō , English stand. 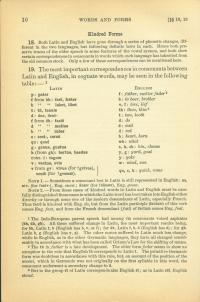