a. A Noun is the name of a person, place, thing, or idea:

Names of particular persons and places are called Proper Nouns; other nouns are called Common.

Note— An Abstract Noun is the name of a quality or idea.

A Collective Noun is the name of a group, class, or the like.

b. An Adjective is a word that attributes a quality.

Note 1— A Participle is a word that attributes quality like an adjective, but, being derived from a verb, retains in some degree the power of the verb to assert.

Note 2— Etymologically there is no difference between a noun and an adjective, both being formed alike. So, too, all names originally attribute quality, and any common name can still be so used. Thus, King William distinguishes this William from other Williams, by the attribute of royalty expressed in the name king.

c. A Pronoun is a word used to distinguish a person, place, thing, or idea without either naming or describing it.

d. A Verb is a word which is capable of asserting something.

sum  I am
amat  he loves

Note— In all modern speech the verb is usually the only word that asserts anything, and a verb is therefore supposed to be necessary to complete an assertion. Strictly, however, any adjective or noun may, by attributing a quality or giving a name, make a complete assertion. In the infancy of language there could have been no other means of asserting, as the verb is of comparatively late development.

e. An Adverb is a word used to express the time, place, or manner of an assertion or attribute.

Note— These same functions are often performed by cases (see § 214 - § 217) of nouns, pronouns, and adjectives, and by phrases or sentences. In fact, all adverbs were originally cases or phrases, but have become specialized by use.

f. A Preposition is a word which shows the relation between a noun or pronoun and some other word or words in the same sentence.

g. A Conjunction is a word which connects words, or groups of words, without affecting their grammatical relations.

Note— Some adverbs are also used as connectives. These are called Adverbial Conjunctions or Conjunctive (Relative) Adverbs.

h. Interjections are mere exclamations and are not strictly to be classed as parts of speech. Thus, heus (halloo!), ō (oh!).

Note— Interjections sometimes express an emotion which affects a person or thing mentioned, and so have a grammatical connection like other words. 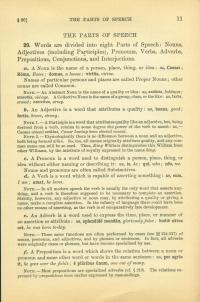 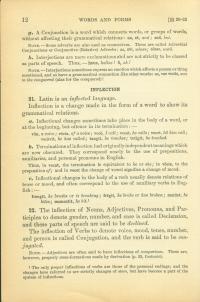