14. Latin, the language of the ancient Romans, was properly, as its name implies, the language spoken in the plain of Latium, lying south of the Tiber, which was the first territory occupied and governed by the Romans. It is a descendant of an early form of speech commonly called Indo-European (called by some Indo-Germanic), from which are also descended most of the important languages now in use in Europe, including among others English, German, the Slavic and the Celtic languages, as well as some now or formerly spoken in Asia, such as Sanskrit, Persian, Armenian. Greek likewise belongs to the same family. The Romance (or Romanic) languages, of which the most important are Italian, French, Provençal, Spanish, Portuguese, and Roumanian, are modern descendants of spoken Latin.

The earliest known forms of Latin are preserved in a few inscriptions. These increase in number as we approach the time when the language began to be used in literature; that is, about 250 B.C. It is the comparatively stable language of the classical period (80 B.C. - 14 A.D.) that is ordinarily meant when we speak of Latin.

15. Among the main features in the changes of Latin from the earliest stages of the language as we know it up to the forms of classical Latin may be mentioned the following:

16. In compounds with prepositions the final consonant in the preposition was often assimilated to the following consonant, but usage varied considerably.

17. The parent language showed great variation in the vowel sounds of kindred words.4

2. Really for †traghsī. The h of trahō represents an older palatal sound (see § 19).

3. Really for †traghtum. These are cases of partial assimilation (cf. Consonant Changes, 2, above).

4. This variation was not without regularity, but was confined within definite limits.

5. In Greek, however, it is more extensively preserved. 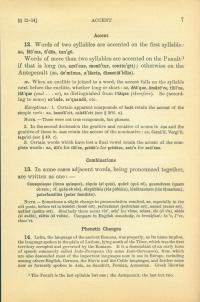 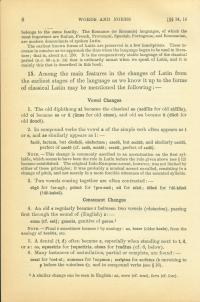 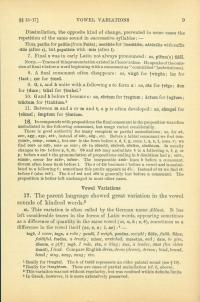