a. Rarely suffixes are added to compound stems imagined, but not used in their compound form.

su-ove-taur-īlia a sacrifice of a swine, a sheep, and a bull
sūs (swine), ovis (sheep), and taurus (bull)
[The primitive would be impossible in Latin, though such formations are common in Sanskrit.] 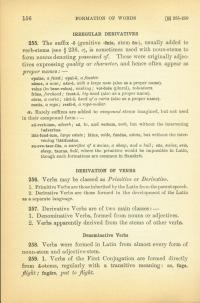