Forms of the Participle

158. The Participles are used as follows.

a. The Present Participle (ending in -ns) has commonly the same meaning and use as the English participle in -ing.

b. The Future Participle (ending in -ūrus) is oftenest used to express what is likely or about to happen.

Note— With the tenses of esse (to be) it forms the First Periphrastic Conjugation (see § 195).

Urbs est cāsūra. The city is about to fall.
Mānsūrus eram. I was going to stay.

1. It is sometimes equivalent to the English Perfect passive participle.

It often simply has an adjective meaning.

2. It is used with the verb to be (esse) to form certain tenses of the passive.

Vocātus est. He was (has been) called

Note— There is no Perfect Active or Present Passive Participle in Latin. For substitutes see §§ 492-493.

d. The Gerundive (ending in -ndus), has two uses:

1. It is often used as an adjective implying obligation, necessity, or propriety (ought or must).

Audiendus est. He must be heard.

Note— When thus used with the tenses of the verb to be (esse) it forms the Second Periphrastic Conjugation.

2. In the oblique cases the Gerundive commonly has the same meaning as the Gerund (cf. § 159.a), though its construction is different. (For examples, see § 503 ff.) 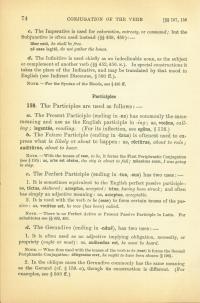