159. The Gerund and Supine are used as follows.

a. The Gerund is a verbal noun, corresponding in meaning to the English verbal noun in -ing (§ 502).

Note— The Gerund is found only in the oblique cases. A corresponding nominative is supplied by the Infinitive.

BUT
ars scrībendī  the art of writing 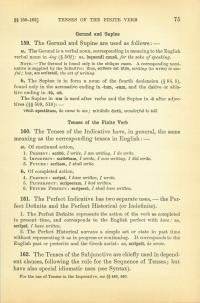