383. The dative is used after adjectives or adverbs, to denote that to which the given quality is directed, for which it exists, or towards which it tends.

Note— The dative with certain adjectives is in origin a Dative of Purpose or End.

384. The dative is used with adjectives (and a few Adverbs) of fitness, nearness, likeness, service, inclination, and their opposites.1

Nihil est tam nātūrae aptum. (Lael. 17)
Nothing is so fitted to nature.

Nihil difficile amantī putō. (Or. 33)
I think nothing hard to a lover.

Note 1— So, also, in poetic and colloquial use, with īdem.

Invītum quī servat idem facit occīdentī.
He who saves a man against his will does the same as one who kills him.

Note 2— Adjectives of likeness are often followed by atque (ac  as). So also the adverbs aequē, pariter, similiter, etc. The pronoun īdem has regularly atque or a relative.

sī parem sapientiam habet ac formam (Plaut. Mil. 1251)
if he has sense equal to his beauty
(like as his beauty)

Tē suspicor eīsdem rēbus quibus mē ipsum commovērī. (Cat. M. 1)
I suspect you are disturbed by the same things by which I am.

385. Other constructions are sometimes found where the dative might be expected.

a. Adjectives of fitness or use take oftener the accusative with ad to denote the purpose or end; but regularly the dative of persons.

b. Adjectives and nouns of inclination and the like may take the accusative with in or ergā.

dē benevolentiā quam quisque habeat ergā nōs (Off. 1.47)
in regard to each man's good will which he has towards us

c. Some adjectives of likeness, nearness, belonging, and a few others, ordinarily requiring the dative, often take the Possessive Genitive.2

quod ut illī proprium ac perpetuum sit . . . optāre dēbētis (Manil. 48)
which you ought to pray may be secure (his own) and lasting to him. [dat.]

Fuit hōc quondam proprium populī Rōmānī. (id. 32)
This was once the peculiar characteristic of the Roman people. [gen.] 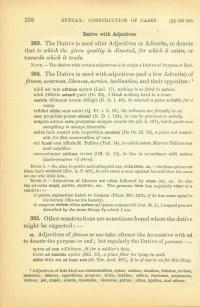 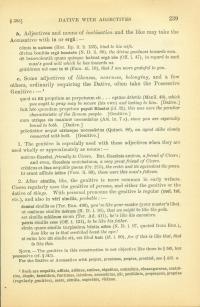