382. The dative is used to denote the purpose or end, often with another dative of the person or thing affected.

This use of the dative, once apparently general, remains in only a few constructions, as follows.

For the Dative of the Gerundive denoting Purpose, see § 505.b. 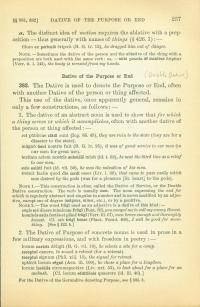