522. The protasis is often wholly omitted, but may be inferred from the course of the argument.

a. In expressions signifying necessity, propriety, and the like, the Indicative may be used in the apodosis of implied conditions, either future or Contrary to Fact.

quod contrā decuit ab illō meum [corpus cremārī] (Cat. M. 84)
whereas on the other hand mine ought to have been burnt by him

Nam nōs decēbat domum lūgēre ubi esset aliquis in lūcem ēditus. (Tusc. 1.115)
For it were fitting for us to mourn the house where a man has been born
(but we do not).

Quantō melius fuerat.(Off. 3.94)
How much better it would have been.

Illud erat aptius, aequum cuique concēdere. (Fin. 4.2)
It would be more fitting to yield each one his rights.

Ipsum enim exspectāre māgnum fuit? (Phil. 2.103)
Would it have been a great matter to wait for the man himself?

Note 1— In this construction, the imperfect indicative refers to present time; the pluperfect to simple past time, like the perfect. Thus oportēbat means it ought to be [now], but is not; oportuerat, means it ought to have been, but was not.

Note 2— In many cases it is impossible to say whether a protasis was present to the mind of the speaker or not (see third example above).

523. Either the protasis or the apodosis may be a complex idea in which the main statement is made with expressed or implied qualifications. In such cases the true logical relation of the parts is sometimes disguised.

Sī quis hōrum dīxisset . . . sī verbum dē rē pūblicā fēcisset . . . multa plūra dīxisse quam dīxisset putārētur. (Rosc. Am. 2)
If any of these had spoken, in case he had said a word about politics he would be thought to have said much more than he did say.

Here the apodosis of dīxisset is the whole of the following statement (sī ... putārētur), which is itself conditioned by a protasis of its own: sī verbum, etc.

Here sī potest (a protasis with nothing implied) has for its apodosis the whole clause which follows, but potuisset has a contrary-to-fact protasis of its own implied in sine . . . ingeniō.

Peream male sī nōn optimum erat. (Hor. S. 2.1.6)
Confound me (may I perish wretchedly) if it wouldn't be better.

Here peream is apodosis to the rest of the sentence, while the true protasis to optimum erat, contrary to fact, is omitted. 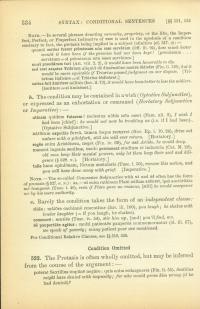 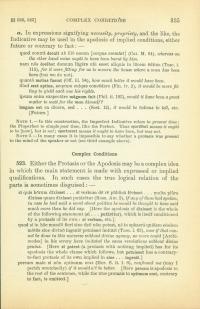