524. Conditional clauses of comparison take the subjunctive, usually in the present or perfect unless the sequence of tenses requires the imperfect or pluperfect. Such clauses are introduced by the comparative particles tamquam, tamquam sī, quasi, ac sī, ut sī, velut sī (later velut), poetic ceu (all meaning as if), and by quam sī (than if).

tamquam clausa sit Asia (Fam. 12.9)
as if Asia were closed

Crūdēlitātem horrērent velut sī cōram adesset. (B. G. 1.32)
They dreaded his cruelty (they said), as if he were present in person.

Hīc ingentem pūgnam cernimus ceu cētera nusquam bella forent. (Aen. 2.438)
Here we saw a great battle, as if there were no fighting elsewhere.
[But sometimes with the indicative in poetry, as id. 5.88.]

Magis ā mē abesse vidēbāre quam sī domī essēs. (Att. 6.5)
You seemed to be absent from me more than if you were at home.

Note 2— The English idiom would lead us to expect the imperfect and pluperfect subjunctive (Contrary to Fact) with these particles; but the point of view is different in the two languages. Thus the second example above is translated just as if I were lame—as if it were a Present Contrary to Fact condition; but it really means just as [it would be] if I should [at some future time] be lame, and so is a Future Less Vivid condition requiring the present subjunctive. Similarly quasi honestē vīxerint (as if they had lived honorably) is really as [they would do in the future] if they should have lived honorably and so requires the perfect subjunctive (§ 516.c).

a. Even after a primary tense, the imperfect or pluperfect subjunctive (Contrary to Fact) is often used in conditional clauses of comparison.

Aequē ā tē petō ac sī mea negōtia essent. (Fam. 13.43)
I entreat you as much as if it were my own business.

Note— The practice differs with the different particles. Thus in Cicero a clause with tamquam or quasi almost always observes the sequence of tenses, but with quam sī the imperfect or pluperfect is the rule. 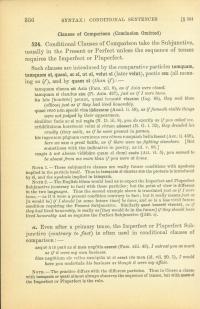