95. The Stem of nouns of the 5th Declension ends in ē-, which appears in all the cases. The Nominative is formed from the stem by adding s.

96. Nouns of the 5th Declension are declined as follows.

Note— The ē of the stem is shortened in the genitive and dative singular of fidēs, spēs, rēs, but in these it is found long in early Latin. In the accusative singular e is always short.

97. All nouns of the 5th Declension are feminine, except diēs (usually m.) day, and merīdiēs (m.) noon.

a. Diēs is sometimes feminine in the singular, especially in phrases indicating a fixed time, and regularly feminine when used of time in general. 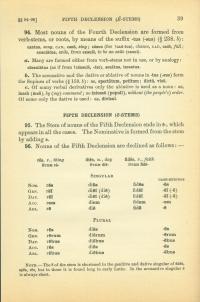 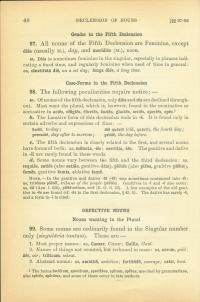