58. Most mute stems are masculine or feminine. Those that are neuter have for the nominative the simple stem. But—

So also stems in ăt- from the Greek.

b. The stem capit- shows u in the nominative (caput for †capot).

59. Nouns of this class are declined as follows.

a. Greek neuters with nominative singular in -a (as poēma) frequently end in -īs in the dative and ablative plural, and rarely in
-ōrum in the genitive plural.

b. A number of monosyllabic nouns with mute stems lack the genitive plural (like cor). See § 103.g.2. 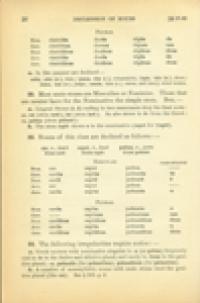