61. In masculine and feminine nouns with liquid and nasal stems the nominative is the same as the stem.

Exceptions are the following:

1. Stems in ōn- drop n in the nominative.

2. Stems in din- and gin- drop n and keep an original ō in the nominative.

4. Stems in tr- have -ter in the nominative.

62. Nouns of this class are declined as follows.

Note 2— A few masculine and feminine stems have a nominative in -s as well as in -r.

Note 3— Canis, dog, and iuvenis, youth, have -is in the nominative.

1. These differences depend in part upon special phonetic laws, in accordance with which vowels in weakly accented or unaccented syllables are variously modified, and in part upon the influence of analogy.

2. These, no doubt, had originally ter- in the stem, but this had become weakened to tr- in some of the cases even in the parent speech. In Latin only the nominative and vocative singular show the e. But cf. Māspitris and Māspiteris (Mā[r]s-piter), quoted by Priscian as old forms. 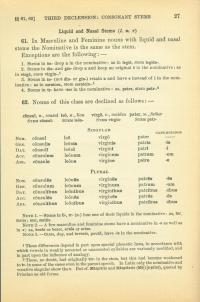