7. Every Latin word has as many syllables as it has vowels or diphthongs.

a. In the division of words into syllables a single consonant (including consonant i and v) between two vowels is written and pronounced with the following vowel. Doubled consonants are separated.

Note 1— Some extend the rule for single consonants to any consonant group (as sp, st, gn) that can begin a word. In this book, dīx-it, sax-um, etc. are preferred to dī-xit, sa-xum; the pronunciation was probably dīc-sit, sac-sum.

Note 2— A syllable ending with a vowel or diphthong is called open; all others are called close. Thus in pa-ter the first syllable is open, the second close.

b. In compounds the parts are separated. 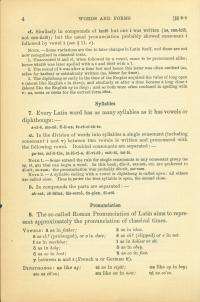