Structure of the Period

600. Latin, unlike modern languages, expresses the relation of words to each other by inflection rather than by position. Hence its structure not only admits of great variety in the arrangement of words, but is especially favorable to that form of sentence which is called a Period. In a period, the sense is expressed by the sentence as a whole, and is held in suspense till the delivery of the last word.

An English sentence does not often exhibit this form of structure. It was imitated, sometimes with great skill and beauty, by many of the earlier writers of English prose; but its effect is better seen in poetry, as in the following passage.

High on a throne of royal state, which far

Outshone the wealth of Ormus and of Ind,

Or where the gorgeous East with richest hand

Showers on her kings barbaric pearl and gold,

But in argument or narrative, the best English writers more commonly give short clear sentences, each distinct from the rest, and saying one thing by itself. In Latin, on the contrary, the story or argument is viewed as a whole; and the logical relation among all its parts is carefully indicated.

601. In the structure of the Period, the following rules are to be observed.

a. In general the main subject or object is put in the main clause, not in a subordinate one.

b. Clauses are usually arranged in the order of prominence in the mind of the speaker; so, usually, cause before result; purpose, manner, and the like, before the act.

c. In coördinate clauses, the copulative conjunctions are frequently omitted (asyndeton). In such cases the connection is made clear by some antithesis indicated by the position of words.

d. A change of subject, when required, is marked by the introduction of a pronoun, if the new subject has already been mentioned. But such change is often purposely avoided by a change in structure, the less important being merged in the more important by the aid of participles or of subordinate phrases.

e. So the repetition of a noun, or the substitution of a pronoun for it, is avoided unless a different case is required.

f. The Romans were careful to close a period with an agreeable succession of long and short syllables.

Quod scīs nihil prōdest, quod nescīs multum obest. (Or. 166) What you know is of no use, what you do not know does great harm.

Note— In rhetorical writing, particularly in oratory, the Romans, influenced by their study of the Greek orators, gave more attention to this matter than in other forms of composition. Quintilian (9.4.72) lays down the general rule that a clause should not open with the beginning of a verse or close with the end of one. 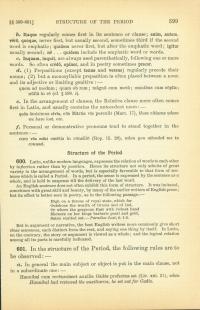 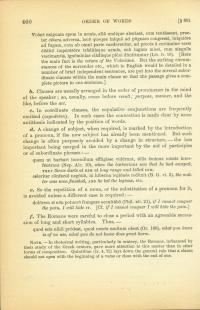