602. The poetry of the Indo-European people seems originally to have been somewhat like our own, depending on accent for its metre and disregarding the natural quantity of syllables. The Greeks, however, developed a form of poetry which, like music, pays close attention to the natural quantity of syllables; and the Romans borrowed their metrical forms in classical times from the Greeks. Hence Latin poetry does not depend, like ours, upon accent and rhyme; but is measured, like musical strains, by the length of syllables. Especially does it differ from our verse in not regarding the prose accent of the words, but substituting for that an entirely different system of metrical accent or ictus. This depends upon the character of the measure used, falling at regular intervals of time on a long syllable or its equivalent. Each syllable is counted as either long or short in Quantity; and a long syllable is generally reckoned equal in length to two short ones (with some exceptions).

The quantity of radical (or stem) syllables—as of short a in păter or of long a in māter—can be learned only by observation and practice, unless determined by the general rules of quantity. Most of these rules are only arbitrary formulas devised to assist the memory; the syllables being long or short because the ancients pronounced them so. The actual practice of the Romans in regard to the quantity of syllables is ascertained chiefly from the usage of the poets; but the ancient grammarians give some assistance, and in some inscriptions long vowels are distinguished in various ways— by the apex, for instance, or by doubling (§ 10.e, Note).

Since Roman poets borrow very largely from the poetry and mythology of the Greeks, numerous Greek words, especially proper names, make an important part of Latin poetry. These words are generally employed in accordance with the Greek, and not the Latin, laws of quantity. Where these laws vary in any important point, the variations will be noticed in the rules below. 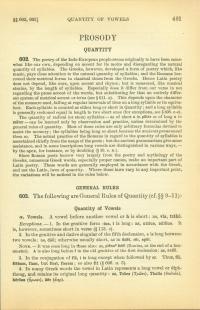