24. The body of a word, to which the terminations are attached, is called the stem. The stem contains the idea of the word without relations; but, except in the first part of a compound (as, arti-fex, artificer), it cannot ordinarily be used without some termination to express them.1

Thus the stem vōc- denotes voice; with -s added it becomes vōx (a voice or the voice) as the subject or agent of an action; with -is it becomes vōcis, and signifies of a voice.

Note— The stem is in many forms so united with the termination that a comparison with other forms is necessary to determine it.

25. A root is the simplest form attainable by separating a word into its component parts. Such a form contains the main idea of the word in a very general sense, and is common also to other words either in the same language or in kindred languages.2

Note— In inflected languages, words are built up from roots, which at a very early time were used alone to express ideas, as is now done in Chinese. Roots are modified into stems, which, by inflection, become fully formed words. The process by which roots are modified, in the various forms of derivatives and compounds, is called stem building. The whole of this process is originally one of composition, by which significant endings are added one after another to forms capable of pronunciation and conveying a meaning. Roots had long ceased to be recognized as such before Latin existed as a separate language. Consequently the forms which we assume as Latin roots never really existed in Latin, but are the representatives of forms used earlier.

26. The Stem may be the same as the root: duc-is (of a leader), fer-t (he bears); but it is more frequently formed from the root—

27. The base is that part of a word which is unchanged in inflection:

a. The Base and the Stem are often identical, as in many consonant stems of nouns (as, rēg- in rēg-is). If, however, the stem ends in a vowel, the latter does not appear in the base, but is variously combined with the inflectional termination. Thus the stem of servus is servo-; that of mēnsa, mēnsā-; that of īgnis, īgni-.

28. Inflectional terminations are variously modified by combination with the final vowel or consonant of the Stem, and thus the various forms of Declension and Conjugation (see § 36 , § 164) developed.

1. Another exception is the imperative second person singular in -e (as, rege).

2. For example, the root STA is found in the Sanskrit tishthami, Greek ἵστημι, Latin sistere and stāre, German fteben, and English stand.

3. These suffixes are Indo-European stem-endings. 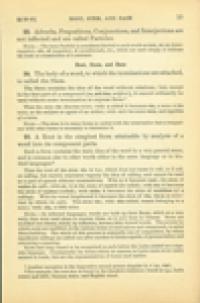 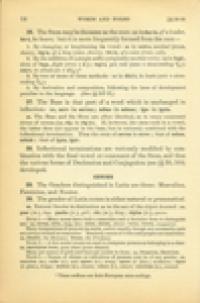