Iter in ea loca facere coepit quibus in locīs esse Germānōs audiēbat. (B. G. 4.7)
He began to march into those PLACES in which PLACES he heard the Germans were.

But one of these nouns is commonly omitted.

The antecedent is in Latin very frequently (rarely in English) found in the relative clause, but more commonly in the antecedent clause.

When the antecedent is in a different sentence, the relative is often equivalent to a demonstrative with a conjunction.

The subordinating force did not belong to the relative originally, but was developed from an interrogative or indefinite meaning specialized by use. But the subordinating and the later connective force were acquired by quī at such an early period that the steps of the process cannot now be traced.

304. A relative pronoun indicates a relation between its own clause and some substantive. This substantive is called the antecedent of the relative.

Thus, in the sentence—

Eum nihil dēlectābat quod fās esset. (Mil. 43)
Nothing pleased him which was right.

the relative quod connects its antecedent nihil with the predicate fās esset, indicating a relation between the two.

305. A relative agrees with its antecedent in gender and number; but, its case depends on its construction in the clause in which it stands.

Ea diēs quam cōnstituerat vēnit. (B. G. 1.8)
That day which he had appointed came.

Pontem quī erat ad Genāvam iubet rescindī. (id. 1.7)
He orders the bridge which was near Geneva to be cut down.

Note— This rule applies to all relative words so far as they are variable in form: as, quālis, quantus, quīcumque, etc.

a. If a relative has two or more antecedents, it follows the rules for the agreement of predicate adjectives (§§ 286 - 287).

For the person of the verb agreeing with the relative, see § 316.a.

306. A relative generally agrees in gender and number with an appositive or predicate noun in its own clause, rather than with an antecedent of different gender or number (cf. § 296.a).

mare etiam quem Neptūnum esse dīcēbās (N. D. 3.52)
the sea, too, which you said was Neptune
[Not quod]

Thēbae ipsae, quod Boeōtiae caput est (Liv. 42.44)
even Thebes, which is the chief city of Bœotia.
[Not quae]

Note— This rule is occasionally violated.

flūmen quod appellātur Tamesis (B. G. 5.11)
a river which is called the Thames

a. A relative occasionally agrees with its antecedent in case (by attraction).

Note— Occasionally the antecedent is attracted into the case of the relative.

Urbem quam statuō vestra est. (Aen. 1.573)
The city which I am founding is yours.

b. A relative may agree in gender and number with an implied antecedent.

ūnus ex eō numerō quī parātī erant (Iug. 35)
one of the number [of those] who were ready

Note— So regularly when the antecedent is implied in a possessive pronoun.

nostra ācta, quōs tyrannōs vocās (Vat. 29)
the deeds of us, whom you call tyrants
[Here quōs agrees with the nostrum (genitive plural) implied in nostra.]

Antecedent of the Relative

307. The antecedent noun sometimes appears in both clauses, but usually only in the one that precedes. Sometimes it is wholly omitted.

a. The antecedent noun may be repeated in the relative clause.

Locī nātūra erat haec quem locum nostrī dēlēgerant. (B. G. 2.18)
The nature of the ground which our men had chosen was this.

Quae prīma innocentis mihi dēfēnsiō est oblāta suscēpī. (Sull. 92)
I undertook the first defence of an innocent man that was offered me.

Note— In this case the relative clause usually comes first (cf. § 308.d below) and a demonstrative usually stands in the antecedent clause.

Quae grātia currum fuit vīvīs, eadem sequitur. (Aen. 6.653)
The same pleasure that they took in chariots in their lifetime follows them (after death).

quī fit ut nēmō, quam sibi sortem ratiō dederit, illā contentus vīvat? (cf. Hor. S. 1.1.1)
How does it happen that no one lives contented with the lot which choice has assigned him?

c. The antecedent may be omitted, especially if it is indefinite.

d. The phrase id quod or quae rēs may be used (instead of quod alone) to refer to a group of words or an idea.

Multum sunt in vēnātiōnibus, quae rēs vīrēs alit. (B. G. 4.1)
They spend much time in hunting, which [practice] increases their strength.

e. The antecedent noun, when in apposition with the main clause, or with some word of it, is put in the relative clause.

f. A predicate adjective (especially a superlative) belonging to the antecedent may stand in the relative clause.

Special Uses of the Relative

308. In the use of relatives, the following points are to be observed.

a. The relative is never omitted in Latin, as it often is in English.

liber quem mihi dedistī
the book you gave me

Is sum quī semper fuī.
I am the same man I always was.

Eō in locō est dē quō tibi locūtus sum.
He is in the place I told you of.

b. When two relative clauses are connected by a copulative conjunction, a relative pronoun sometimes stands in the first and a demonstrative in the last.

Erat profectus obviam legiōnibus Macedonicīs quattuor, quās sibi conciliāre pecūniā cōgitābat eāsque ad urbem addūcere. (Fam. 12.23.2)
He had set out to meet four legions from Macedonia, which he thought to win over to himself by a gift of money and to lead (them) to the city.

c. A relative clause in Latin often takes the place of some other construction in English,—particularly of a participle, an appositive, or a noun of agency.

ille quī petit
the plaintiff (he who sues)

quī legit
a reader (one who reads)

d. In formal or emphatic discourse, the relative clause usually comes first, often containing the antecedent noun (cf. § 307.b above).

Note— In colloquial language, the relative clause in such cases often contains a redundant demonstrative pronoun which logically belongs in the antecedent clause.

Ille quī cōnsultē cavet, diūtinē ūtī bene licet partum bene. (Plaut. Rud. 1240)
He who is on his guard, he may long enjoy what he has well obtained.

e. The relative with an abstract noun may be used in a parenthetical clause to characterize a person, like the English such.

Caesar statuit exspectandam classem; quae ubi convēnit, etc. (B. G. 3.14)
Cæsar decided that he must wait for the fleet; and when this had come together, etc.

quae quī audiēbant
and those who heard this (which things)

quōrum quod simile factum (Cat. 4.13)
what deed of theirs like this?

Note— This arrangement is common even when another relative or an interrogative follows. The relative may usually be translated by an English demonstrative, with or without and.

g. A relative adverb is regularly used in referring to an antecedent in the locative case; so, often, to express any relation of place instead of the formal relative pronoun.

mortuus Cūmīs quō sē contulerat (Liv. 2.21)
having died at Cumœ, whither he had retired
[Here in quam urbem might be used, but not in quās.]

rēgna unde genus dūcis (Aen. 5.801)
the kingdom from which you derive your race

unde petitur
the defendant (he from whom something is demanded)

h. The relatives quī, quālis, quantus, quot, etc. are often rendered simply by as in English.

tanta dīmicātiō quanta numquam fuit (Att. 7.1.2)
such a fight as never was before 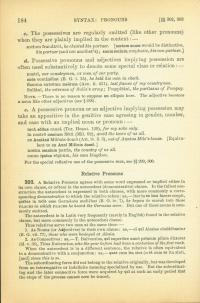 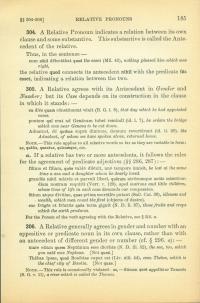 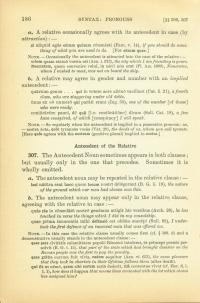 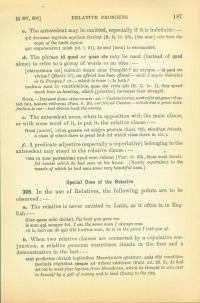 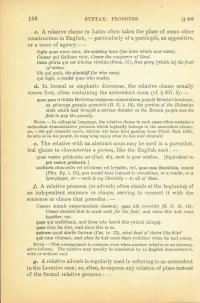 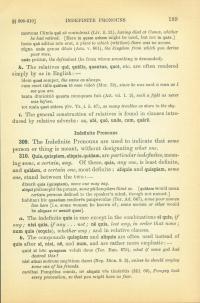