330. Questions are either Direct or Indirect.

331. Questions in Latin are introduced by special interrogative words, and are not distinguished by the order of words, as in English.1

Note— The form of indirect questions (in English introduced by whether, or by an interrogative pronoun or adverb) is in Latin the same as that of direct; the difference being only in the verb, which in indirect questions is regularly in the subjunctive (§ 574).

332. A question of simple fact, requiring the answer yes or no, is formed by adding the enclitic -ne to the emphatic word

a. The interrogative particle -ne is sometimes omitted.

Patēre tua cōnsilia nōn sentīs? (Cat. 1.1)
Do you not see that your schemes are manifest? (you do not see, eh?)

Note— In such cases, as no sign of interrogation appears, it is often doubtful whether the sentence is a question or an ironical statement.

b. When the enclitic -ne is added to a negative word, as in nōnne, an affirmative answer is expected. The particle num suggests a negative answer.

Rēctēne interpretor sententiam tuam? (Tusc. 3.37)
Do I not rightly interpret your meaning?

Note 1— This was evidently the original meaning of -ne; but, in most cases the negative force was lost and -ne was used merely to express a question. So the English interrogative no? shades off into eh?

Note 2— The enclitic -ne is sometimes added to other interrogative words.

333. A question concerning some special circumstance is formed by prefixing to the sentence an interrogative pronoun or adverb as in English (§ 152).

Quid exspectās? (Cat. 2.18)
What are you looking forward to?

Note— A question of this form becomes an exclamation by changing the tone of the voice.

Quālis vir erat!
What a man he was!

Quot calamitātēs passī sumus!
How many misfortunes we have suffered!

a. The particles -nam (enclitic) and tandem may be added to interrogative pronouns and adverbs for the sake of emphasis.

Quisnam est?
Pray, who is it?
[quis tandem est? would be stronger.]

In quā tandem urbe hōc disputant? (Mil. 7)
In what city, pray, do they maintain this?

334. A Double or Alternative Question is an inquiry as to which of two or more supposed cases is the true one.

335. In Double or Alternative Questions, utrum or -ne (whether), stands in the first member; an, anne (or), annōn, necne (or not), in the second; and usually an in the third, if there is one.

Note— Anne for an is rare. Necne is rare in direct questions, but in indirect questions it is commoner than annōn. In poetry -ne . . . -ne sometimes occurs.

a. The interrogative particle is often omitted in the first member; in which case an or -ne (anne, necne) may stand in the second.

b. Sometimes the first member is omitted or implied, and an (anne) alone asks the question—usually with indignation or surprise.

An iste umquam dē sē bonam spem habuisset, nisi dē vōbīs malam opīniōnem animō imbibisset? (Verr. 1.1.42)
Would he ever have had good hopes about himself unless he had conceived an evil opinion of you?

c. Sometimes the second member is omitted or implied, and utrum may ask a question to which there is no alternative.

Utrum est in clārissimīs cīvibus is, quem, etc.? (Flacc. 45)
Is he among the noblest citizens, whom, etc.?

Note— From double (alternative) questions must be distinguished those which are in themselves single, but of which some detail is alternative. These have the common disjunctive particles aut or vel (-ve).

Here there is no double question. The only inquiry is whether the man did either of the two things supposed, not which of the two he did.

336. There is no one Latin word in common use meaning simply yes or no. In answering a question affirmatively, the verb or some other emphatic word is generally repeated; in answering negatively, the verb, etc., with nōn or a similar negative.

a. An intensive or negative particle, a phrase, or a clause is sometimes used to answer a direct question.

nōn quidem  why, no, certainly not, etc.

Quidnam? An laudātiōnēs? Ita.
Why? What? Is it eulogies? Just so.

337. In answering a double question, one member of the alternative, or some part of it, must be repeated.

Vīdistī an dē audītō nūntiās?
Did you see it or are you repeating something you have heard? 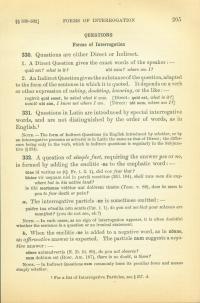 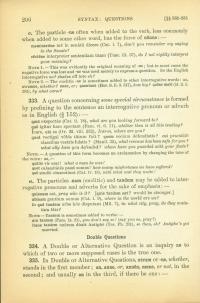 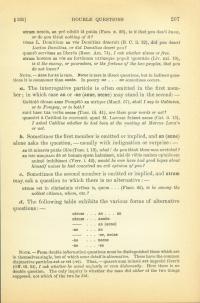 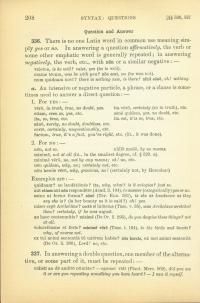