338. The cases of nouns express their relations to other words in the sentence. The most primitive way of expressing such relations was by mere juxtaposition of uninflected forms. From this arose in time composition, i.e. the growing together of stems, by means of which a complex expression arises with its parts mutually dependent. Thus such a complex as armi-gero- came to mean arm-bearing; fidi-cen-, playing on the lyre. Later, cases were formed by means of suffixes expressing more definitely such relations, and syntax began. But the primitive method of composition still continues to hold an important place even in the most highly developed languages.

Originally the Indo-European family of languages, to which Latin belongs, had at least seven case forms, besides the vocative. But in Latin the locative and the instrumental were lost1 except in a few words (where they remained without being recognized as cases), and their functions were divided among the other cases.

The nominative, accusative, and vocative express the simplest and perhaps the earliest case relations. The nominative is the case of the subject, and generally ends in -s. The vocative, usually without a termination, or like the nominative (§ 38.a), perhaps never had a suffix of its own.2 The accusative, most frequently formed by the suffix -m, originally connected the noun loosely with the verb-idea, not necessarily expressed by a verb proper, but as well by a noun or an adjective (see § 386).

The genitive appears to have expressed a great variety of relations and to have had no single primitive meaning; and the same may be true of the dative.

The other cases perhaps at first expressed relations of place or direction (TO, FROM, AT, WITH), though this is not clear in all instances. The earlier meanings, however, have become confused with each other, and in many instances the cases are no longer distinguishable in meaning or in form. Thus the locative was for the most part lost from its confusion with the dative and ablative; and its function was often performed by the ablative, which is freely used to express the place where (§ 421). To indicate the case relations—especially those of place—more precisely, prepositions (originally adverbs) gradually came into use. The case endings, thus losing something of their significance, were less distinctly pronounced as time went on (see § 36, phonetic decay), and prepositions have finally superseded them in the modern languages derived from Latin. But in Latin a large and various body of relations was still expressed by case forms. It is to be noticed that in their literal use cases tended to adopt the preposition, and in their figurative uses to retain the old construction. (See Ablative of Separation, § 402 - § 404; Ablative of Place and Time, § 421 ff.)

The word cāsus (case) is a translation of the Greek πτῶσις (a falling away from the erect position). The term πτῶσις was originally applied to the oblique cases (§ 35.g), to mark them as variations from the nominative, which was called ὀρθή (erect; cāsus rēctus). The later name nominative (cāsus nōminātīvus) is from nōminō, and means the naming case. The other case names (except ablative) are of Greek origin. The name genitive (cāsus genetīvus) is a translation of γενική [πτῶσις], from γένος (class), and refers to the class to which a thing belongs. Dative (cāsus datīvus, from dō) is translated from δοτική, and means the case of giving. Accusative (accūsātīvus, from accūsō) is a mistranslation of αἰτιατική (the case of causing), from αἰτία (cause), and meant to the Romans the case of accusing. The name vocative (vocātīvus, from vocō) is translated from κλητική (the case of calling). The name ablative (ablātīvus, from ablātus, auferō) means taking from. This case the Greek had lost.

1. Some of the endings, however, which in Latin are assigned to the dative and ablative are doubtless of locative or instrumental origin (see § 80, footnote). 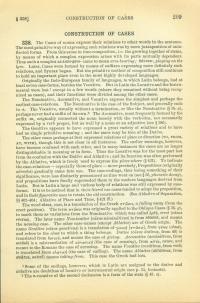