604. The Quantity of Final Syllables is as follows.

a. Monosyllables ending in a vowel are long.

b. Nouns and adjectives of one syllable are long.

c. Most monosyllabic Particles are short.

d. Final a in words declined by cases is short, except in the Ablative singular of the 1st declension; in all other words final a is long.

1. In adverbs formed from adjectives of the first and second declension, with others of like form.

2. In nouns of the 5th declension.

3. In Greek neuters plural of the 2nd declension.

4. In the imperative singular of the 2nd conjugation.

However, sometimes it is short.

Final i is common in mihi, tibi, sibi, ibi, ubi; and short in nisĭ, quasĭ, sīcutĭ, cuĭ (when making two syllables), and in Greek Vocatives (Alexĭ).

g. Final o is common, but long in Datives and Ablatives; also in nouns of the 3rd declension. It is almost invariably long in verbs before the time of Ovid.

h. Final u is long. Final y is short.

1. -as is short in anăs and in Greek plural Accusatives.

2. -es is short in the Nominative of nouns of the 3rd declension (lingual) that have a short vowel in the stem.1

3. -os is short in compŏs, impŏs; in the Greek Nominative ending (barbitŏs) and the old Nominative of the 2nd declension (servŏs; later servus).

6. -us is long in the Genitive singular and Nominative, Accusative, and Vocative plural of the 4th declension, and in nouns of the 3rd declension having ū (long) in the stem.

j. Of other final syllables, those ending in a single consonant are short.

1. The quantity of the stem vowel may be seen in the Genitive singular. 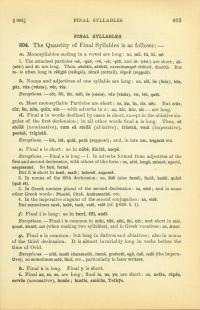 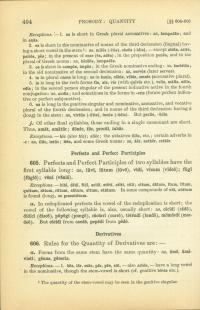