145. The Possessive pronouns are as follows.

These are really adjectives of the 1st and 2nd Declensions, and are so declined (see § 110  - § 112). But meus has regularly mī (rarely meus) in the vocative singular masculine.

Patrem suum occīdit. He killed his (own) father.

BUT
Patrem êius occīdit. He killed his (somebody else's) father.

a. Emphatic forms in -pte are found in the ablative singular.

b. A rare possessive is formed from the genitive singular of the relative or interrogative pronoun quī, quis.

It may be either interrogative or relative in force according to its derivation, but is usually the former.

c. The reciprocals one another and each other are expressed by inter sē or alter . . . alterum.

inter sē amant
they love one another (they love among themselves) 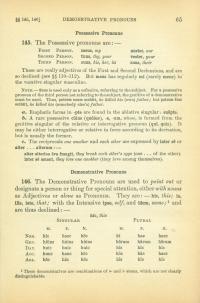