421. The locative case was originally used (literally) to denote the place where and (figuratively) to denote the time when (a development from the idea of place). But this case was preserved only in names of towns and a few other words, and the place where is usually denoted by the ablative. In this construction the ablative was no doubt, used at first without a preposition, but afterwards it became associated in most instances with the preposition in.

422. In expressions of time and place the Latin shows a variety of idiomatic constructions (ablative, accusative, and locative), which are systematically treated in § 423 ff. 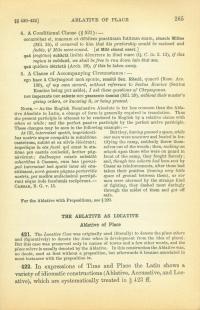