423. Time when, or within which, is expressed by the ablative; time how long by the accusative.

424. Special constructions of time are the following.

a. The Ablative of Time Within Which sometimes takes in, and the Accusative of Time How Long per, for greater precision.

in diēbus proximīs decem (Iug. 28)
within the next ten days

b. Duration of time is occasionally expressed by the ablative.

Note— In this use the period of time is regarded as that within which the act is done, and it is only implied that the act lasted through the period. Cf. inter annōs quattuordecim (B. G. 1.36) for fourteen years

c. Time during which or within which may be expressed by the accusative or ablative of a noun in the singular, with an ordinal numeral.

d. Many expressions have in Latin the construction of time when where in English the main idea is rather of place.

e. In many idiomatic expressions of time, the accusative with ad, in, or sub is used. Such are the following.

Convēnērunt ad diem.
They assembled on the [appointed] day.

f. Distance of time before or after anything is expressed in several different ways.

g. In Dates the phrase ante diem (a.d.) with an ordinal, or the ordinal alone, is followed by an accusative, like a preposition; and the phrase itself may also be governed by a preposition. The year is expressed by the names of the consuls in the Ablative Absolute, usually without a conjunction (§ 419.a).

Is diēs erat a. d. v. Kal. Apr. (quīntum Kalendās Aprīlīs) L. Pīsōne A. Gabīniō cōnsulibus. (B. G. 1.6)
That day was the 5th before the kalends of April (March 28), in the consulship of Piso and Gabinius.

xv. Kal. Sextīlīs
the 15th day before the kalends of August (July 18) 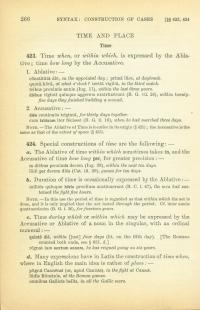 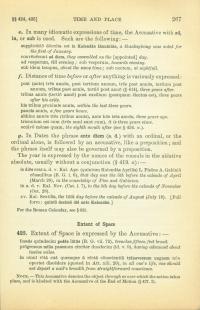